ABOUT THE MID-ATLANTIC WRESTLING EVENTS COMING UP IN YOUR AREA... 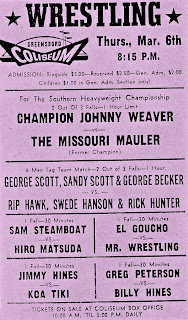 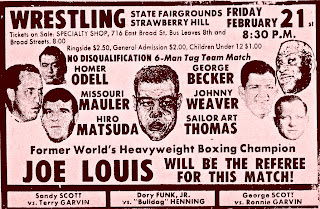 RICHMOND, VIRGINIA
(What a booking for DORY FUNK JR.---wrestling 'Bulldog' LEE HENNING in a prelim.) 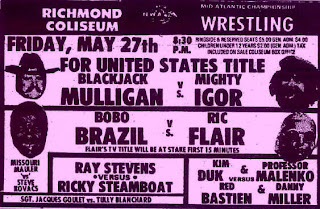 RICHMOND, VIRGINIA
(from the MID-ATLANTIC GATEWAY) 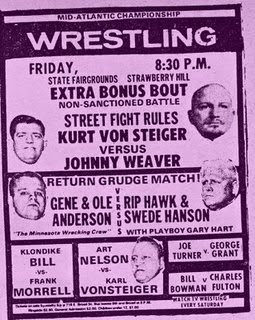 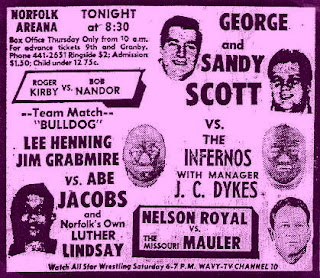 NORFOLK, VIRGINIA
Posted by Mike Cline at 3:05 AM No comments:

On November 3, 2007, in Rocky Mount, Virginia, a tribute was held to celebrate the wrestling career of the man who, more than ANYONE else, was synonymous with the terms MID-ATLANTIC CHAMPIONSHIP WRESTLING and JIM CROCKETT PROMOTIONS... 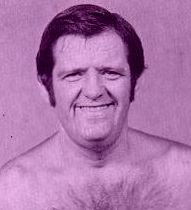 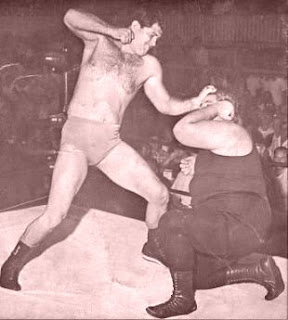 Johnny getting the better of a long-time ring nemesis...George 'Two Ton' Harris. 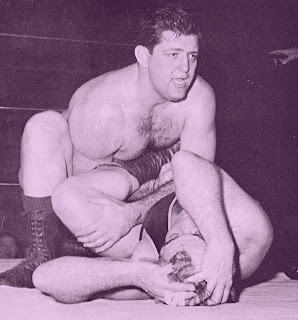 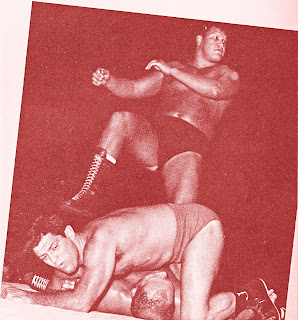 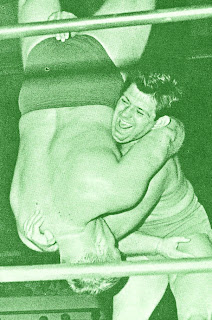 Johnny shows Ole Anderson the quickest way to the mat. 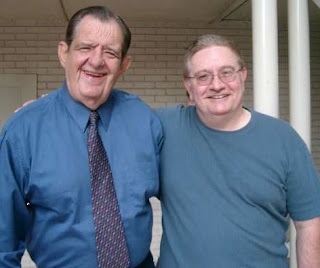 THE MAN and me 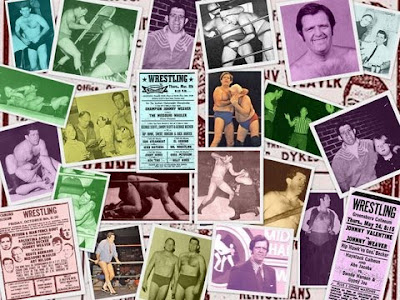 JOHNNY WEAVER...the wrestling world will never have another like him.
Posted by Mike Cline at 2:57 AM No comments:

WHERE WILL THIS ONE END?


There may be occasion to pin a wrestler anywhere in the PARK CENTER building tonight.

A SIX MAN TAG TEAM rematch between all three of the ANDERSON BROTHERS (LARS, GENE and OLE) and their foes, PAUL JONES and the SCOTT BROTHERS (GEORGE and SANDY), has been contracted.

Because of wild romps their last time out, it has been decided that the referee can make his count either inside or outside of the ring.

"We'll catch them any way or any where we can," promises SANDY SCOTT, speaking for his team, the winner's last Monday night. "We'll play the ANDERSONs' game---and beat them at it!"

The FALLS COUNT ANYWHERE match is for the best-of-three falls within a one-hour time limit.

Young BOBBY SHANE will tangle with veteran TOM BRADLEY, bushy-haired and rough from the opening bell, in the semi-final event.

JOHNNY HEIDEMAN, a fellow who loves to spend his off hours on a handball court, takes on RON CHARLES, a newcomer, in the 8:15 opening match.
Posted by Mike Cline at 2:52 AM No comments: