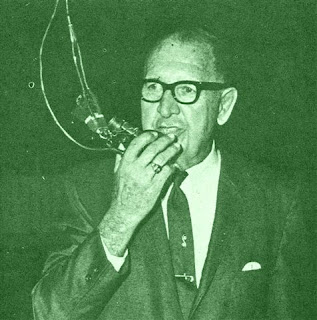 I remember George Harben as the ring announcer on WBTV's CHAMPIONSHIP WRESTLING TV program, which was video taped every Wednesday night in Charlotte and broadcast that following Saturday afternoon.

And for a number of those years, the same program was broadcast over WBTV's 'sister station' in Florence, South Carolina.

However, Mr. Harben's career in the wrestling business went back quite a bit further than announcing on television and at house shows at PARK CENTER and the CHARLOTTE COLISEUM.

Harben was born in Stone Mountain, Georgia, a famous historical spot that is still visited by tourists the year round. He broke into the business as a wrestler in 1933 and had an active career until retiring in 1956.

In 1935, George helped train one of the all-time greats of modern wrestling, none other than LOU THESZ, who went on to become WORLD HEAVYWEIGHT CHAMPION six times. THESZ was a young boy of eighteen when he worked with Harben.

In 1940, during the years of World War 2, George Harben made a trip to Australia by boat to wrestle and was on board when the vessel was struck by a mine off the coast of New Zealand.

He also wrestled in Cuba before Fidel Castro took control of that country.

George Harben wrestled with his brother Charlie over most of the United States as a tag team. The two were in the main event that drew the largest crowd to ever witness a wrestling card at the old CHARLOTTE ARMORY. It was in early 1953, and the Harbens' opponents were GEORGE and BOBBY BECKER.

Besides his ring announcing duties for JIM CROCKETT PROMOTIONS, Harben also assisted in advertising the company's wrestling shows in several other towns besides Charlotte and for a while promoted house shows in Hickory, North Carolina.

George Harben passed away some years ago, but I can still his voice---
"Good evening Ladies and Gentleman and welcome to another exciting evening of Championship Wrestling on Channel 3."

GEORGE HARBEN during his career as a wrestler.


Jim Harben said...
I remember George Harben. He continued in promotions and advertisement for Jim Crockett promotions until his death. Professional wrestling was is life. He died at my kitchen table of heart failure following a hospital stay and procedure for prostate cancer. He is survived by three sons and one daughter, seven grandchildren and four great-grandchildren.
Posted by Mike Cline at 2:39 AM No comments: 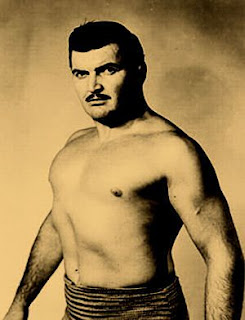 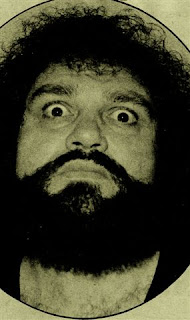 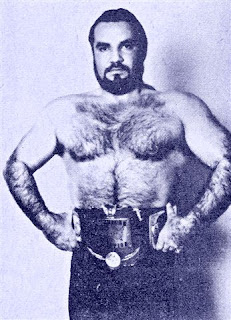 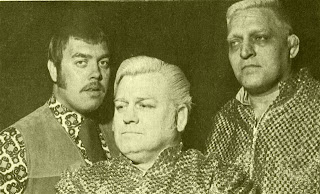 (What can I say about these guys that hasn't been said? One of the greatest teams in wrestling histories. RIP and SWEDE were together for about sixteen years, HART joined them as their manager in 1969. They headlined wrestling cards in every territory they worked.)
Posted by Mike Cline at 3:04 AM No comments:

Today, I shine the spotlight on a group of the good guys of MID-ATLANTIC CHAMPIONSHIP WRESTLING.

Called 'babyfaces' in the business, these are the wrestlers 'we the people' love to watch carry out the ideals of good, clean living. They live by the creed of wrestling by the rule book (although when provoked, will 'fight fire with fire' to settle a score). No hair pulling, no eye gouging, no low blows.

Although the line between good guys and bad guys is a bit thinner in the business now than in days gone by, we buy wrestling tickets and pull to see these heroes dish out 'truth, justice and the American Way' to the perpetrators of evil. 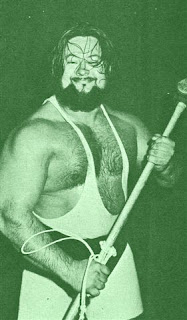 A former AWA WORLD HEAVYWEIGHT CHAMPION, he used the 'gentle giant' gimmick, loved children and puppy dogs. Came to JCP from the IWA. His biggest feud in the MID-ATLANTIC territory came when BORIS MALENKO and THE MASKED SUPERSTAR (Bill Eadie) burned him in the eye with a lit cigar. 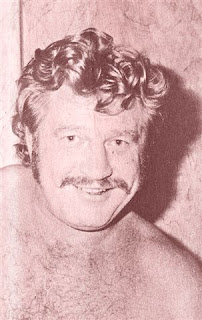 Top 'babyface' throughout the wrestling world, did several stints in JCP, one during his prime in the early 1960s, then later in the mid-1970s as a mid-card worker.) 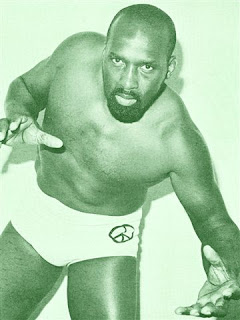 A boxer-turned wrestler, he enjoyed success as a WWWF Tag Team Champion before coming to JCP in 1974 as a 'relative' of BEARCAT WRIGHT to feud with JOHNNY VALENTINE. In 1982, he was seriously stabbed at the CHARLOTTE COLISEUM.

Father of wrestlers JAKE ROBERTS, SAM HOUSTON and ROCKIN' ROBIN, this man did everything there is to do in the wrestling business. In CROCKETT country, he's best remembered as one of THE KENTUCKIANS (with BIG BOY BROWN), who had monumental battles with THE GREAT BOLO and BOLO, as well as every other top heel team in MID-ATLANTIC WRESTLING. In the late 1960s, he teamed in JCP with MR. WRESTLING (TIM WOODS), and repeated the cycle. 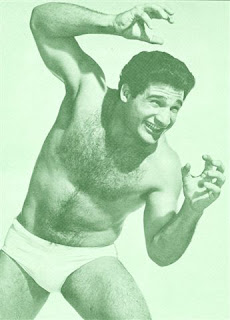 A professional painter as well as wrestler, APOLLO was a top star in every wrestling territory he worked, holding a vast array of championships. He made his mark in JCP in 1972-1973, becoming the partner of top good guy JOHNNY WEAVER, after decade-long partner GEORGE BECKER left the CROCKETT company. 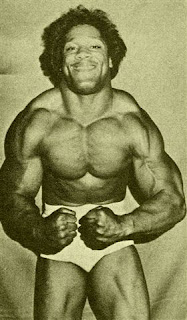 Three-time 'MR. U.S.A.' in the field of bodybuilding, he started wrestling in JCP in 1975, had big feuds with both THE IRON SHEIK and KEN PATERA, and became MID-ATLANTIC HEAVYWEIGHT CHAMPION. Later worked for WORLD CLASS WRESTLING, the AWA and WWF (now WWE).
Posted by Mike Cline at 3:23 AM No comments:

During his unparalleled career, RIC FLAIR probably wrestled the largest array of wrestling stars than any other performer in the business. 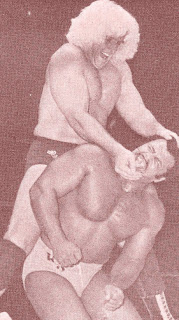 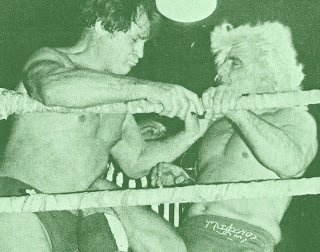 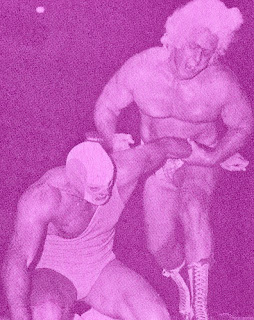 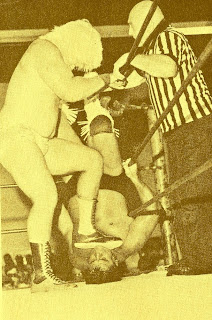 WAHOO MCDANIEL
(Their feud is what put FLAIR on the radar.) 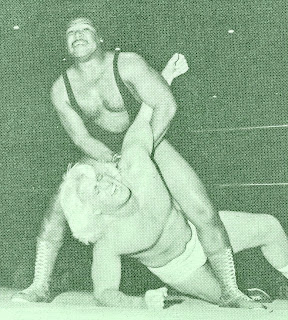 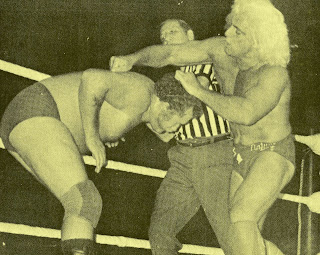 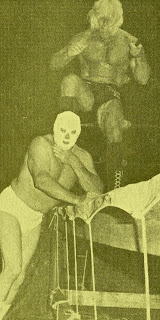 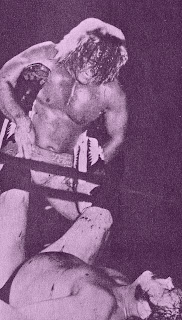 BLACKJACK MULLIGAN
What JCP fan can ever forget the hat / robe program... 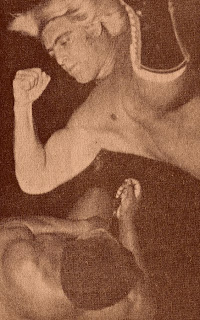 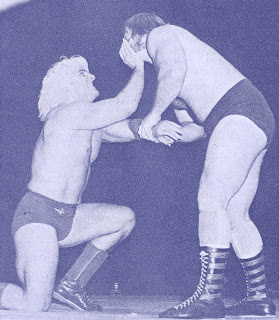 'Cousin' OLE ANDERSON
Posted by Mike Cline at 2:41 AM No comments: