Two men who have experienced the thrill of being a world champion are part of tonight's big wrestling card at the CHARLOTTE COLISEUM. Belltime is 8:15 p.m.

One is JOE LOUIS, known world-wide as the "BROWN BOMBER" and great champion of the boxing world. He held the heavyweight title for twelve years. LOUIS will confront wrestlers tonight in the capacity of special referee.

Also on the card is DORY FUNK JR., the newly-crowned WORLD HEAVYWEIGHT CHAMPION of the wrestling universe. The Texan dethroned the long-time champ GENE KINISKI just last week. FUNK will make a title defense against the unpredictable and rugged "BULLDOG" LEE HENNING. The belt is on the line in a two-out-of falls match with a one-hour time limit.

Champ JOE LOUIS has been chosen by the NWA to police the SIX MAN TAG TEAM co-main event.

The battle finds GEORGE BECKER, JOHNNY WEAVER and SAILOR ART THOMAS going against THE MISSOURI MAULER, HIRO MATSUDA and their manager HOMER O'DELL (who will be in ring attire, not his usual tuxedo). This encounter will be of the NO DISQUALIFICATION venue, and the losing team will leave with empty pockets. Promoter JIM CROCKETT says the winning team gets both purses. It's also best-of-three falls. And with NO DQ and JOE LOUIS, anything is likely to happen.

Another tag team battle on tap will send the popular duo of ABE JACOBS and STEVE BOLUS against the rough and tough combo of RIP HAWK and SWEDE HANSON.

The ladies will shine tonight in the ring when PENNY BANNER takes on JEAN DORSEY.

An autograph session for the fans to meet their favorite wrestlers will take place before the matches begin.

An observation - - - "BULLDOG" LEE HENNING in a World title match?
By this time in his career, he was already "jobbing". Makes one wonder who else would be contenders for FUNK's belt - - - JESSE JAMES, BILLY SPEARS?

I was eighteen at the time. Maybe I should have had a shot at the championship.
Posted by Mike Cline at 2:49 AM No comments: 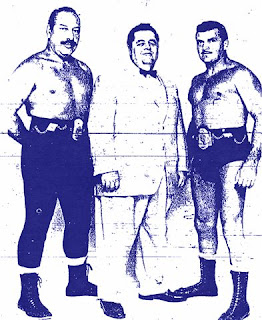 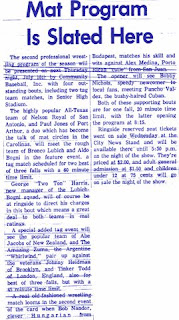 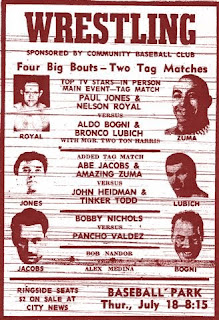 The summer of 1968 was a great season for Statesville, N.C. Crockett wrestling fans. Three outdoor cards were promoted by the Community Baseball organization, and the weather cooperated for them all.

This was the second wrestling show of the three.

Pancho Valdez in a rare victory, this time over Bobby Nichols

(Bogni, Lubich and Harris had been disqualified in their June 20th Statesville match against Zuma and Mr. Wrestling.)

Statesville, then known as "The City of Progress" was not proving to be a great town for these three scalawags, but they would return the following month in the summer's final wrestling program.
Posted by Mike Cline at 2:55 AM No comments: