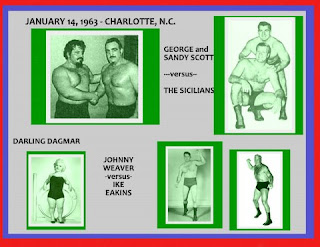 A return tag team match is on tap for tonight at PARK CENTER when THE FLYING SCOTTS, GEORGE and SANDY, are rematched against THE SICILIANS, LOU ALBANO and TONY ALTAMORE, in the two-out-of-three falls main event.

The two teams staged a frantic battle last week, with THE SILCILIANS winning the lone fall before the hostilities were halted by the time limit. Tonight's contest will have NO TIME LIMIT, and both teams are chomping at the bit to get back into the ring to settle it all.

A special event brings in midgets girls, BABY CHERYL and DARLING DAGMAR, for a one fall skirmish. Refereeing this match will be another midget girl, DOLLY DARCELL. All three weigh in at less than 100 pounds each.