Fans who witnessed a RUSSIAN CHAIN MATCH between Chief WAHOO McDANIEL and The GREAT (BORIS) MALENKO knew it wouldn't be a Greco-Roman wrestling contest.

It was KILL OR BE KILLED! 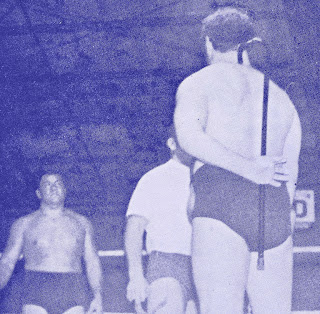 As if a long stretch of steel chain wasn't weapon enough, MALENKO tried to add to his arsenal before the match begin with a walking cane (Homer O'Dell must have been nearby). 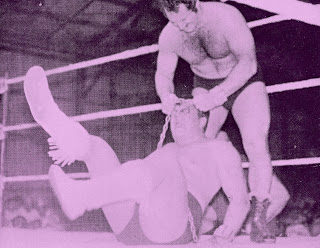 The mad Russian gives WAHOO's noggin' a massage with the cold steel. 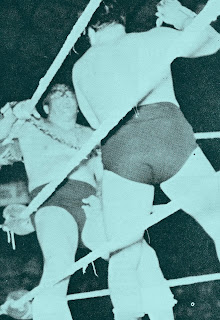 The Chief is in serious trouble. 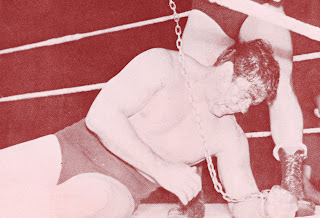 It's going to be a long walk to the pay window. 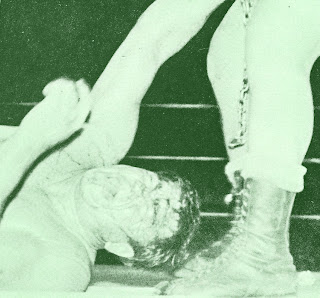 In spite of the photos showing the Chief getting the short end, somehow WAHOO won the battle, beating MALENKO at his own match.

Perhaps all of those Indian Strap Matches WAHOO had paid dividends.

EDWARD 'WAHOO' MCDANIEL, Choctaw-Chickasaw Native American, was a born athlete who achieved World fame in both football and wrestling. WAHOO passed away in 2002.

THE GREAT MALENKO (Lawrence Simon), like Wahoo, was a huge wrestling star all over the world, in both single and tag team competition. He was responsible for training many young men as they broke into the pro wrestling business. He died in 1994.
Posted by Mike Cline at 2:28 AM