THE PLAYBOY GETS HIS

You could push a mild-mannered guy like JERRY BRISCO only so far. 'Playboy' GARY HART crossed the line and paid the price!

"Chain matches disgust me," claimed JERRY. "If a wrestler can't win a match on his ability alone---then he should get out of the business."

Then why did BRISCO end up in a 1973 CHARLOTTE COLISEUM ring battling 'Playboy' GARY HART in a CHAIN MATCH?

At a point in the match, it seemed that OLE was really on the short end of a wrestling match, and that didn't happen often. ANDERSON was the victim of a series of dropkicks, spinning toe holds and the abdominal stretch. The end appeared to be near.

Enter GARY HART. Angry that he hadn't been given a title match as he had demanded, HART jumped into the ring to OLE's defense---with a chain.

The heavy metal object left its marks on BRISCO. The referee disqualified ANDERSON due to HART's outside interference. JERRY remained EASTERN HEAVYWEIGHT CHAMPION.

Immediately, HART challenged BRISCO to a match...a CHAIN MATCH. The 'Playboy' and the man he managed, RIP HAWK, told everyone that JERRY wouldn't accept the challenge...because he was yellow.

But they were wrong.

The match was signed for The Big Dome in CHARLOTTE.

It was a night GARY HART regreted. Although he had a few shining moments during the match, the night belonged to JERRY BRISCO. HART was soon a bloody mess, so bad that RIP HAWK grabbed his manager and dragged his limp body to the dressing room and on to the hospital.

Talk about a plan that backfired. 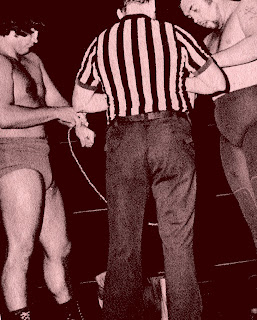 The referee secures each end of the chain to the combatants' wrists. 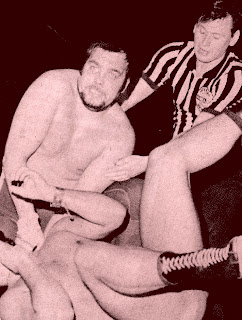 HART gets the advantage by choking BRISCO with the heavy chain. 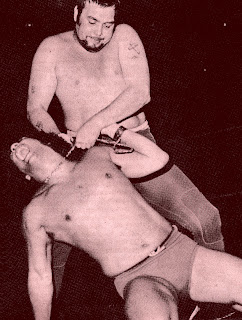 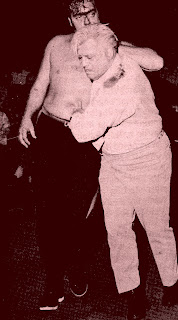 The tide of battle changed, as RIP HAWK helps his manager from the ring.

The EASTERN HEAVYWEIGHT CHAMPION is victorious.
Posted by Mike Cline at 3:23 AM