Today's entry is a bit of a stretch, considering this blog is a tribute to JIM CROCKETT PROMOTIONS. However, the center of the story is GEORGE BECKER, the wrestler who was one of the top performers in JCP for twenty years, so I hope you will indulge my expanding the limits.

Popular GEORGE BECKER left CROCKETT PROMOTIONS in 1971, but as it turned out, he did not leave the wrestling business.

"For many years, GEORGE BECKER has been one of professional wrestling's biggest stars. This fact is attested to by thousands of the sport's fans who have sent in votes for BECKER since his retirement a few months ago requesting GEORGE be inducted into the Wrestling Hall of Fame.

BECKER, though retired from the mat, has not quit the wrestling business. He has become a promoter. He and MIKE GALLAGHER, another retired grappler, recently began their own wrestling company through an association with the SHAKEY'S PIZZA chain. Their small independent shows started up a few weeks ago (in and around Charlotte, North Carolina), and whether the two will be successful or not, is not yet known."

from an article by GENE GORDON in the July, 1972 issue of WRESTLING REVUE

Even though the promotion did not last very long, I thought you might enjoy these rare glimpses of the BECKER / GALLAGHER promotion and some of the wrestlers on their roster. 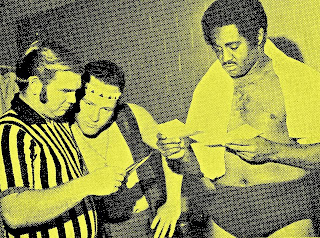 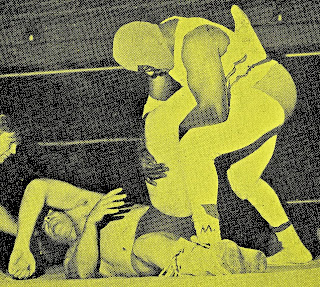 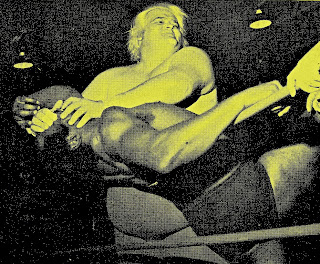 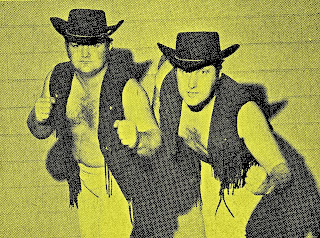 THE VALENTINE BROTHERS
JERRY and JIMMY 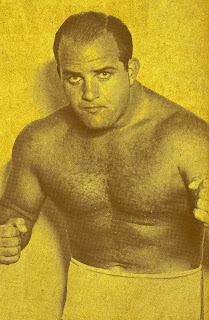 MIKE GALLAGHER during his in-ring career.

MIKE and brother DOC formed a potent heel team in JCP during the late 1950s and early 1960s and often feuded with BECKER at the time. 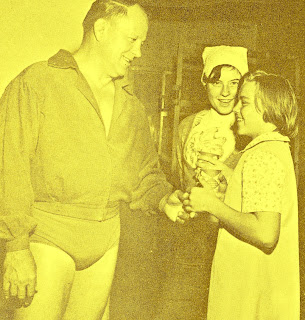 Throughout his wrestling career, GEORGE appreciated his fans and was always accessible to them. 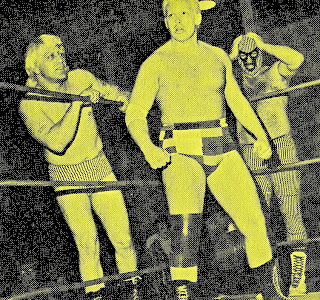 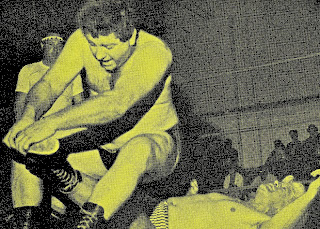 DALE STARR works on the leg of DIZZY McSHANE in a match held in Gastonia, North Carolina. 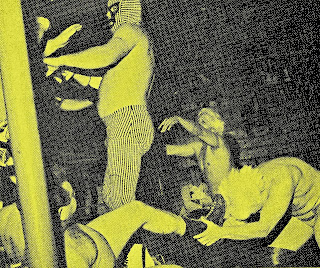 McSHANE, RIDDLE and THE CONVICT do battle with DALE STARR and the VALENTINE BROTHERS, JIMMY and JERRY.

Going up against JIM CROCKETT PROMOTIONS in their hometown of Charlotte was a mountain too high to climb.
Posted by Mike Cline at 4:20 AM