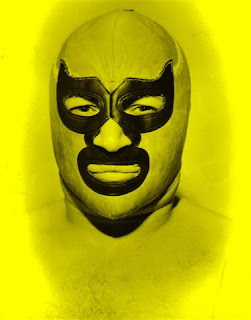 TOM RENESTO as THE GREAT BOLO
---
A west coast professional wrestler calling himself 'THE GREAT BOLO' wants the courts to unmask Charlotte's version of the hooded villain.

AL LOVELOCK, who claims he was licensed to wrestle under the ring name of 'THE GREAT BOLO' in 1953, filed a suit against THOMAS F. RENESTO in Superior Court Monday, asking $20,000 in actual and $100,000 in punitive damages.

LOVELOCK, from Houston, Texas, also seeks a court order preventing RENESTO from using the name and mask of 'THE GREAT BOLO'. 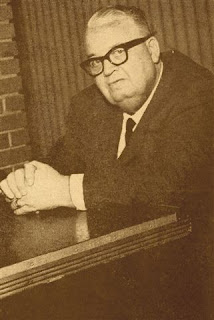 JIM CROCKETT
---
The bulky wrestler claims that RENESTO served as his 'second' while he was winning matches in Arizona, California, Texas and other states.

RENESTO made his first 'BOLO' appearance in Charlotte in February, 1958. Since then, he has developed into a major attraction for promoter JIM CROCKETT's wrestling shows all over both Carolinas and Virginia, while managing to avoid being unmasked.

He won a Charlotte match just Monday night, defeating LARRY 'CRUSHER' HAMILTON, but his share of the purse was attached as a result of the court action. 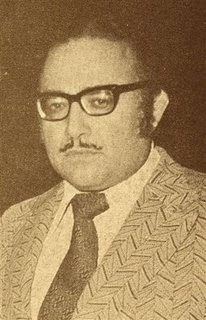 Neither CROCKETT nor RENESTO could be reached for immediate comment.

Taken from an ASSOCIATED PRESS story which appeared in the January 27, 1959 issue of THE CHARLOTTE OBSERVER.

Obviously, LOVELOCK was not successful in his lawsuit in blocking 'THE GREAT BOLO' in JIM CROCKETT PROMOTIONS, as TOM RENESTO continued as the masked character in JCP until 1964, along the way adding JODY HAMILTON as his lookalike partner for tag team purposes. The two then left for other wrestling territories and changed their ring name to THE ASSASSINS.

The irony of this story is that although 'THE GREAT BOLO' was never unmasked or his identity exposed in the wrestling ring, his real name was revealed in the court papers when the suit was filed and the story was reported in the press.

I wonder how many wrestling fans were paying attention.
Posted by Mike Cline at 3:38 AM