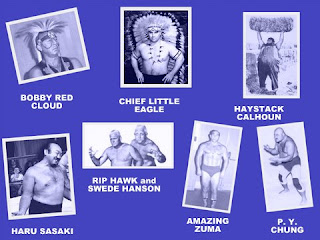 Oriental wrestlers HARU SASAKI and P. Y. CHUNG will have their judo wizardry challenged again when they are rematched against the spectacular Indian combo of CHIEF LITTLE EAGLE and BOBBY RED CLOUD at the LEXINGTON YMCA, starting at 8:15.

The Indians, winners of a disputed verdict in an earlier encounter, have their "tomahawk chops" which are very close to the "judo chops" used by the Orientals.

They'll battle for the best-of-three falls to determine a winner.

Two other top teams will meet in the week's two-out-of-three falls co-main event. The hero combination of HAYSTACK CALHOUN and THE AMAZING ZUMA will tangle with wrestling's "Blonde Bombers", RIP HAWK and SWEDE HANSON.

Preliminary bouts have a "south of the border" flavor.

THE MATADOR, also from Mexico, faces ANGELO MARTINELLI in the opener.
Posted by Mike Cline at 4:02 AM