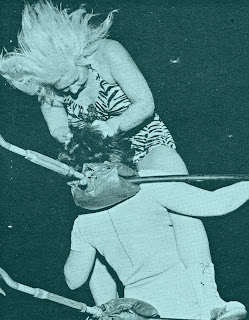 PENNY goes for a monkey flip... 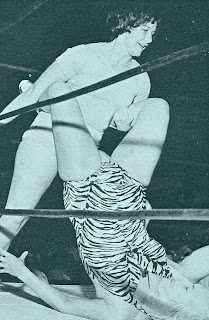 TAMMY counters with a Boston crab...

Referee ANGELO MARTINELLI always had his hands full when he worked with the ladies... 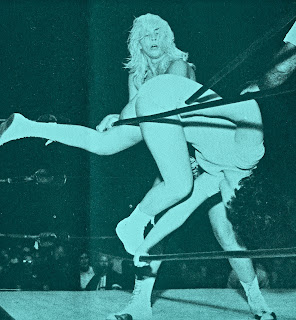 PENNY gives TAMMY a free ride back into the ring...
---
I don't recall there ever being a contest in JIM CROCKETT PROMOTIONS in which a JCP Queen was crowned, but if there had been, the title would, without question, have gone to the wonderful PENNY BANNER.

I can't begin to estimate how many times I saw PENNY wrestle, either on TV or in the arenas, but the number wasn't a small one.

By far, PENNY's most frequent opponent, at least in the BANNER bouts I saw, was TAMMY JONES. I had to have seen these two go at it, at least, twenty-five times, so I can only imagine how many other times they worked each other (maybe as many times as Bambi has wrestled Peggy Lee Leathers).

I can recall PENNY and TAMMY colliding in Charlotte and Greensboro, and most likely Winston-Salem as well, and even the old semi-pro baseball park in Statesville, North Carolina, on a hot and muggy summer night in the late 1960s.

Unlike most of the current 'diva' matches on TV (in which every move is choreographed more than a Fred Astaire / Ginger Rogers dance number --- AND LOOKS IT!), the lady grapplers from what I consider the "golden" age of pro wrestling could REALLY work...the Ole Anderson way...wrestle the match in the rings as it flows, not making it up in the dressing room beforehand.

PENNY and TAMMY could really go.
Posted by Mike Cline at 3:25 AM No comments:

Fans who followed JIM CROCKETT PROMOTIONS in the late 1960s (I'm one) will certainly remember a fellow named BOB GRIFFIN.

His role in JCP was that of 'talent enhancer' and he was great in this position.

BOB and various partners couldn't defeat the likes of THE INFERNOS, BERNARD and MURPHY or HAWK and HANSON, unless the heels were disqualified, but in arenas, he could take the number of PEDRO GODOY, EL GAUCHO and PANCHO VALDEZ.

But even in a loss, BOB gave a great match. 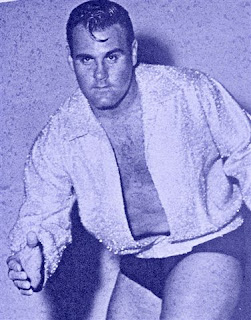 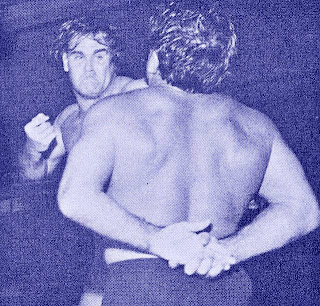 HIRO MATSUDA takes one from GRIFFIN. 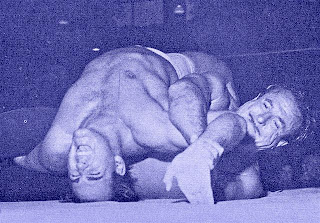 EL GAUCHO has BOB in a temporary disadvantage. 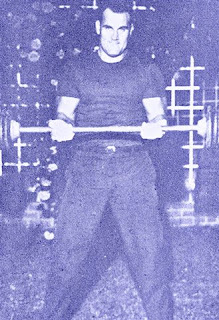 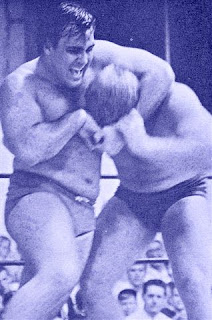 GRIFFIN has OLE ANDERSON in a headlock in this TV match taped at WBTV CHARLOTTE. 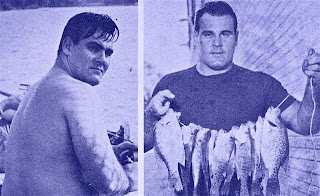 Out of the ring, BOB was an avid fisherman. 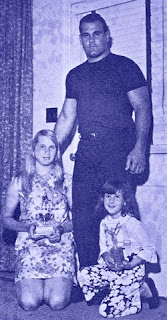 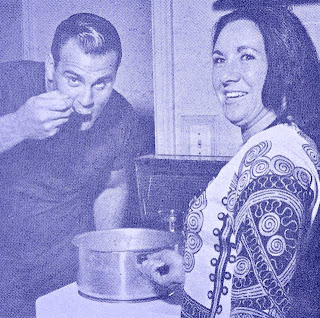 BOB samples some of wife PAT's home cooking.
---
From Jacksonville, Florida, home of the GATOR BOWL, comes BOB GRIFFIN, a young wrestling sensation who is rapidly skyrocketing his way to fame and fortune on the mat.

Appearing in the Carolinas and Virginia under the promotional banner of JIM CROCKETT, this handsome, well-built 230-pounder, who stands six feet, one inch tall, has gained an army of fans since his professional debut.

"As far back as I can remember," BOB says, "I dreamed of being a professional wrestler. I really had the fever since the age of ten when I attended my first wrestling event in Jacksonville."

BOB credits DON CURTIS, a well-known grappler and the promoter there in Jacksonville, in helping him get started in the business.

After making his debut against none other than CURTIS, and losing in fifteen minutes, BOB was more eager than ever to make it in the wrestling business.

BOB has never regretted leaving his job as a mechanical engineer at IT&T. His wife PAT agrees that wrestling pays better and is glad BOB made the change, even if he is on the road a lot more.

A physical culturist, BOB works out with the weights and does a lot of running to stay in top shape.

Since his arrival in Charlotte, BOB has wrestled mostly as a single, but has recently been teaming with fan favorite GREG PETERSON.

Here's hoping this popular youngster will remain in CROCKETT PROMOTIONS for a long time.
---
Excerpted from the November, 1969 issue of WRESTLING REVUE
Posted by Mike Cline at 3:30 AM 4 comments: 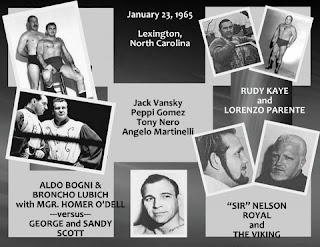 Professional wrestling at the LEXINGTON YMCA was called off last Saturday due to a heavy snowfall but is slated to return tonight with a banner card.

THE FLYING SCOTTS, popular GEORGE and SANDY, will mix it up with a long-time nemesis team in the likes of BRONCHO LUBICH and ALDO BOGNI. The battle will be for the best two-out-of-three falls. And when you have BOGNI and LUBICH in the ring, you also have manager HOMER O'DELL outside the ring, and he can be as dangerous as his wrestlers. So the SCOTT boys will have their hands full.

A rowdy rulebreaking team debuts in LEXINGTON tonight as "SIR" NELSON ROYAL and THE VIKING are matched up against RUDY KAYE and newcomer LORENZO PARENTE in another best-of-three falls tag contest.

Whether they were the guys we loved or the guys we hated, we bought tickets to see them...and they delivered the goods... 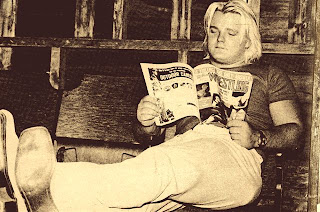 GREG 'THE HAMMER' VALENTINE during some down time. 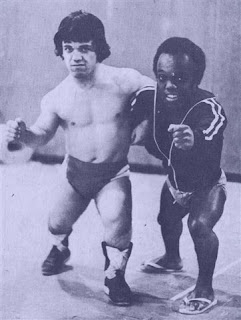 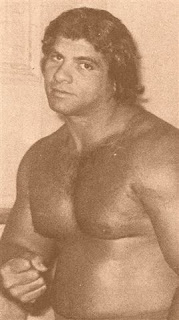 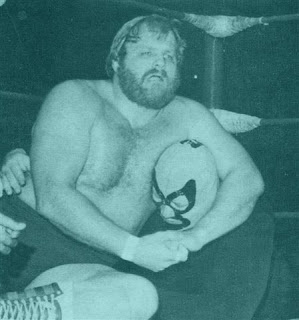 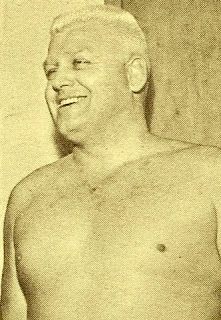 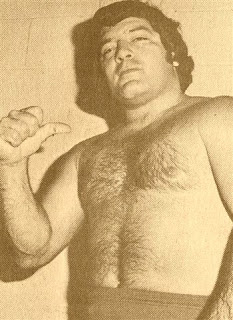 'MR. NUMBER ONE' PAUL JONES points to his favorite wrestler. 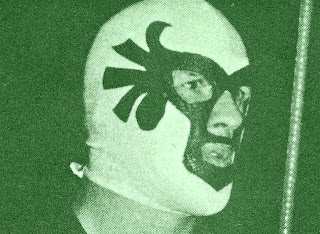 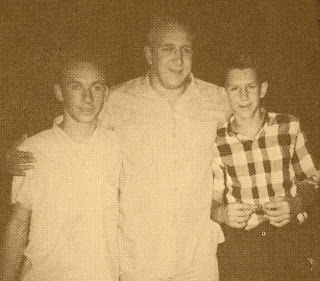