The 8:15 opening match sends REGGIE PARKS against "JUDO" JACK TERRY.
Posted by Mike Cline at 2:37 AM No comments: 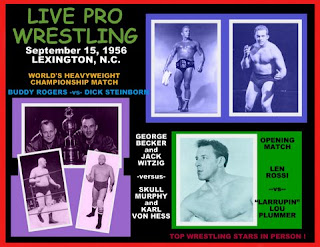 Wrestling attendance may have been lagging a bit at the LEXINGTON YMCA in recent weeks, but it gets a major shot in the arm tonight with a double main event attraction that would grab notice in any arena in the nation.

Local sponsors of the grappling business are making plans to pull a big attendance for tonight's slate that includes tag team and singles action.

One of ringdom's most colorful individuals, "NATURE BOY" BUDDY ROGERS, a great (but disliked) WORLD HEAVYWEIGHT CHAMPION from the Northeast, makes his local debut for the main event. The strutting blonde-headed genius will have his hands full because he'll be opposing one of the fastest-rising young stars in the business, DICK STEINBORN.

This is a match that STEINBORN has been requesting since hearing the Champ was headed this way.

ROGERS' championship could seriously be challenged in this two-out-of-three falls title match.

Tonight's tag team match could well be one of the best-ever presented in the 4500 seat YMCA arena.

It's one the fans demanded themselves.

It sends the glamour gentlemen of the sport, GEORGE BECKER and JACK WITZIG against those roughest of mean men, KARL VON HESS and SKULL MURPHY. Fans have wanted to see BECKER and WITZIG get a chance to lamblast these villains, and tonight, it comes to fruition. They'll battle for the best-of-three falls.

The opener tonight should also be a corker, because it matches the explosive young LEN ROSSI against the stubborn Texan roughie, "LARRUPIN" LOU PLUMMER.
Posted by Mike Cline at 2:50 AM No comments:

BOGNI AND LUBICH DEBUT IN LEXINGTON 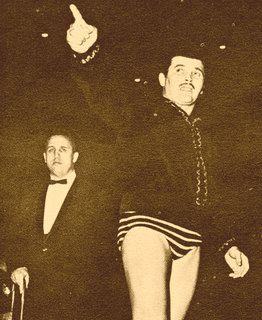 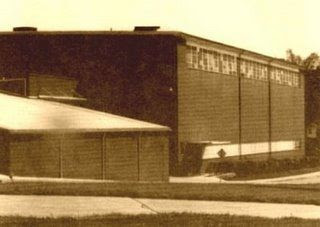 Popular young LARRY HULIN (from nearby Asheboro) will pair up with LOUIS BONE to face the duo of FRANK VALOIS and ALDO BOGNI. BOGNI, a rugged competitor from Argentina, is making his local debut tonight.

Another newcomer to the area, BRONCHO LUBICH, who is accompanied by his manager, HOMER O'DELL, takes on fan favorite EDUARDO CASTILLIO in one of the pre-lims, while Negro stars JIMMY BALLARD and PAUL HARRISON square off in the 8:15 opener.
Posted by Mike Cline at 3:01 AM No comments: