SCHMIDT, noted as one of the very toughest wrestlers on the American circuit, will face another rugged grappler in that of LENNY MONTANA *.

The bout, which will be a test for both wrestlers, is set for two-out-of-three falls, with a one hour time limit.

The rest of the card is dotted with new faces.

The semi-final brings in newcomer BILL DROMO, a youngster with a big reputation, to meet the rough and tough SWEDE HANSON. DROMO is from Detroit and specializes in the scientific approach to the sport, unlike HANSON.

Another prelim will unveil two newcomers to the Charlotte area when young JOHNNY WEAVER ** takes on EDDIE AUGER.

The 8:15 opener brings in still another new face, SIR ALLAN GARFIELD, who will team with TINKER TODD to face the combo of STEVE BOLUS and KEN COOPER.
Posted by Mike Cline at 3:15 AM No comments: 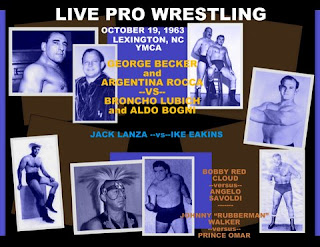 Both BECKER and ROCCA, extremely popular with fans everywhere, are returning to Lexington after lengthy absences to meet 'COLONEL' HOMER O'DELL's rulebreaking duo. And yes, 'COLONEL' O'DELL will be in the corner of his men. The match is set for the best-of-three falls with a one-hour time limit.

Two big men will slug it out in the night's two-out-of-three falls semifinal match as big and tough IKE EAKINS takes on JACK LANZA. *

The respected Indian wrestling star, BOBBY RED CLOUD, makes his debut here tonight when he faces rugged ANGELO SAVOLDI in one of the evening's prelim matches.

Opening the card at 8:15 will be PRINCE OMAR facing the versatile JOHNNY 'RUBBERMAN' WALKER**.

'RING' IN THE NEW YEAR

A rematch between tag teams of SAILOR ART THOMAS and ABE JACOBS and THE MINNESOTA WRECKING CREW has been ordered to feature the first wrestling card of the new year tonight at the LEXINGTON YMCA.

Last week, GENE and OLE ANDERSON took a hurried and early leave during an exciting third fall, and THOMAS and JACOBS were declared winners by way of a "count out". A double purse goes to the winning team of tonight's two-out-of-three falls battle.

A BATTLE OF THE BULLIES is set in the evening's best-of-three fall semifinal when ruffians JIMMY and BILLY HINES battle Jap star HIRO MATSUDA and scrapper THE MISSOURI MAULER. The HINES boys wrestled here previously as THE MASKED RED DEMONS.

Lovely BARBARA OWENS and DONNA CHRISTIAN square off in a LADIES MATCH, with unlady-like antics predicted.