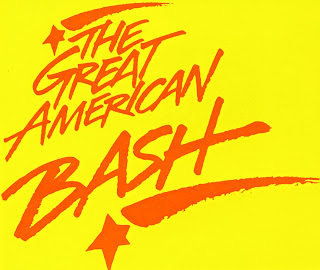 JIM CROCKETT PROMOTIONS, into its sixth decade of operation, would soon be no more.
---
The sale of the company to TURNER ENTERTAINMENT was on the horizon.
---
In one of its final big programs, THE GREAT AMERICAN BASH was a month-long event, starting July 1 in Lakeland, Florida and ending July 31 at the Orange Bowl in Miami. But in-between these two Sunshine State shows, The BASH journeyed as far west as Los Angeles and San Francisco, and north as Landover, Maryland. Cross-country shows were held in Chicago, Atlanta, Richmond, Cincinnati, Pittsburgh, Oklahoma City, Baltimore, Charlotte, Greensboro, Norfolk, Dallas, Houston, Philadelphia and Cleveland, among others. 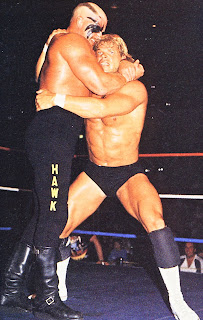 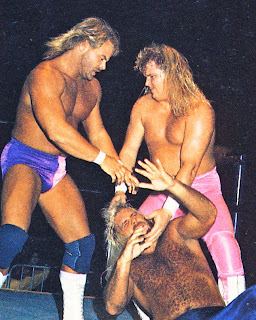 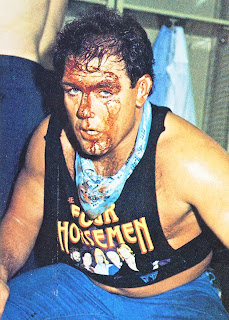 TULLY BLANCHARD shows the toll on his body after battling DUSTY RHODES. 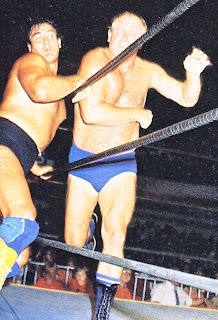 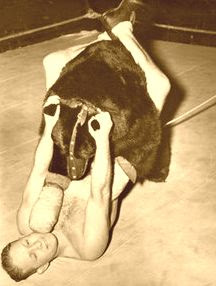 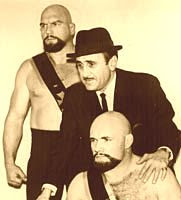 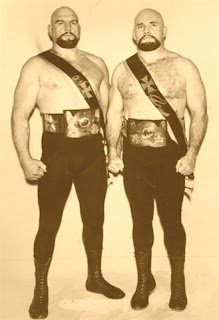 A wrestling bear comes to the LEXINGTON YMCA this week to provide addition excitement to an all-star pro wrestling card.

TERRIBLE TED, 500 pounds and standing seven feet tell, will be matched against a tough wrestler in the likes of FIRPO ZYBSKO in a special attraction.

The German team of KURT and KARL VON BRAUNER, who missed their LEXINGTON debut last week because of injuries, are matched against LEE GARCIA and ANGELO MARTINELLI, impressive last week in a victory over substitutes for the Germans, in this week's co-feature.

The SOUTHERN TAG TEAM CHAMPIONSHIP, recently won by the VON BRAUNERs, will be on the line in a best-of-three-falls contest.

The German duo, who are managed by GENTLEMAN SAUL WEINGROFF, are also the WORLD TAG TEAM CHAMPIONS.

COWBOY BILL COLE will face BILLY COX, and GENE DUBOIS squares off against HERB LARSEN in the week's preliminary matches.

The 8:15 opening match sends REGGIE PARKS against "JUDO" JACK TERRY.
Posted by Mike Cline at 2:47 AM No comments:

A salute to five of the top tag teams who filled arenas all across the JIM CROCKETT PROMOTIONS territory during the 1960s... 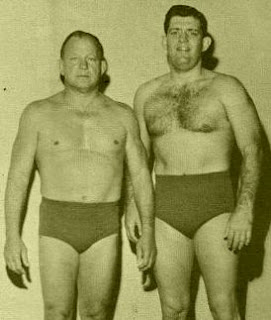 Without question, THE tag team for nearly the entire decade...
GEORGE BECKER and JOHNNY WEAVER 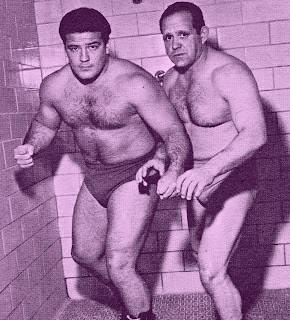 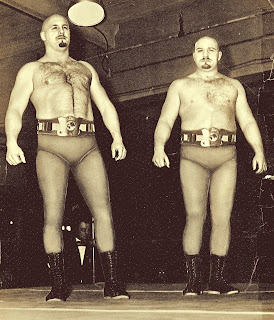 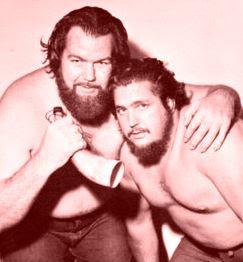 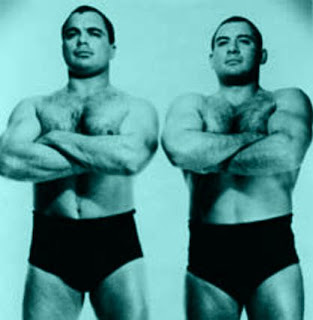 THE MICHIGAN WRECKING CREW
JOHN and CHRIS TOLOS
Posted by Mike Cline at 3:42 AM No comments: