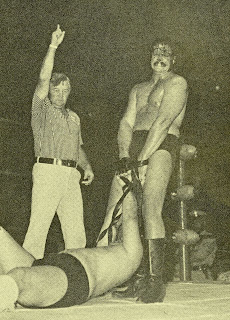 BJ has the upper hand over Wahoo in an Indian Strap match as referee Sonny Fargo looks on. Look out Thunderbolt Patterson...Mulligan is coming in for a landing... 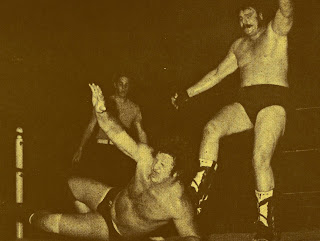 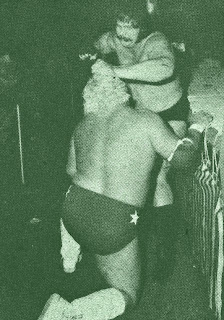 The American Dream feels like anything but in this battle with BJ... 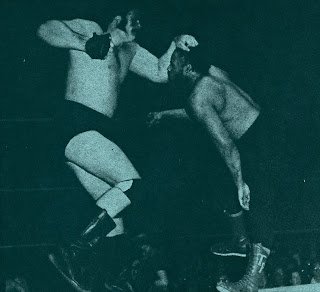 T-Bolt is about to become another BJ 'claw' victim...
---
Wherever he wrestled, as a heel or babyface, he was 'over' big-time.
BLACKJACK MULLIGAN drew fans to the TV screen or the arenas like a flame attracts a moth.

His interviews are as legendary as Paul Bunyan and Johnny Appleseed. Who will ever forget the stories of Odessa, Sweetwater, 'Spider Grip' and 'Reba Joe'?

There has been a large number of 'cowboy' wrestlers throughout the years, but none were ever as colorful and entertaining as BLACKJACK MULLIGAN (Bob Windham).

Thank you, Sir, for all the entertainment you gave JCP fans.
Posted by Mike Cline at 2:46 AM No comments: