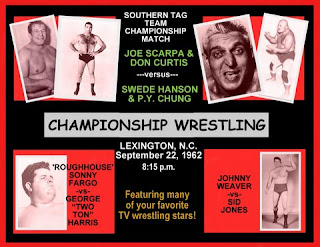 There are new SOUTHERN TAG TEAM CHAMPIONS in the pro wrestling world, and the title holders will defend their newly-coveted belts in tonight's main event at the LEXINGTON YMCA.

DON CURTIS and JOE SCARPA, who recently annexed the championship from the German duo of KURT and KARL VON BRAUNER, make their local debuts tonight when they defend their titles against the rugged bully team of SWEDE HANSON and P.Y. CHUNG in a best-of-three falls contest.

HANSON and CHUNG would like to make the new champs' title reign a short one by dethroning them tonight. The challengers are tough enough to do so.

Popular young star JOHNNY WEAVER, who has created quite the sensation since arriving on the local wrestling scene several months ago, will meet SID JONES in what looks to be a scientific semi-final two-out-of-three falls match.

JOE SCARPA later wrestled as CHIEF JAY STRONGBOW.
Posted by Mike Cline at 3:21 AM No comments:

Wrestling fans, who have been waiting out a two week holiday period of action at the LEXINGTON YMCA, will be treated to a big four bout card tonight starting at 8:15.

The sensational brother team from Peru, LEE and JOE GARCIA, will meet the unusual combination of the Oriental P.Y. CHUNG and Spain's JAN MADRID in the evening's two-out-of-three falls main event. CHUNG is making his Lexington debut tonight.

In a special attraction, HAPPY HUMPHREY, a 750 lb. behemoth from Georgia, makes his debut here and will face the ever-popular GEORGE BECKER.

In the prelims, WALDO VON ERICH battles JIM QUEEN, and BILLY COX squares off against MARK STONE in the opening match. 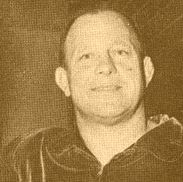 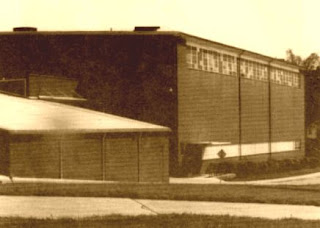 LEXINGTON, N.C. YMCA
Posted by Mike Cline at 3:01 AM No comments:

CLASH OF THE TITANS

In 1981 and 2010, movie goers could visit their local theatres to see an adventure / fantasy production entitled CLASH OF THE TITANS.

However, some years earlier, fans of JIM CROCKETT PROMOTIONS could witness
their own CLASH when two of the longest-running and most vicious heel tag teams went at it.

It was RIP HAWK and SWEDE HANSON (The Blonde Bombers) versus GENE and OLE ANDERSON (The Minnesota Wrecking Crew). 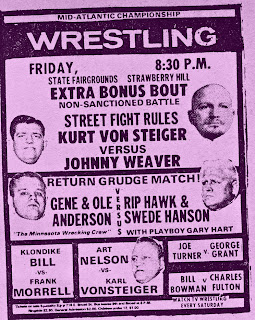 Here's a 1972 card featuring the BATTLE OF THE BULLIES match as held in RICHMOND, VIRGINIA. 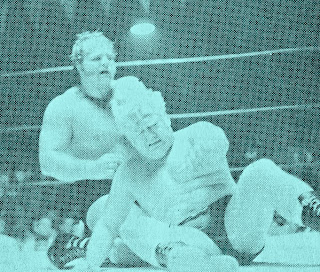 OLE ANDERSON and RIP HAWK throw the rule book out the window. 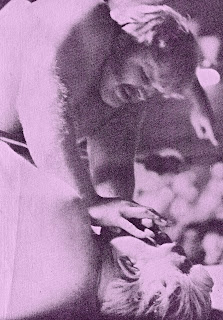 OLE has the upper hand on RIP. 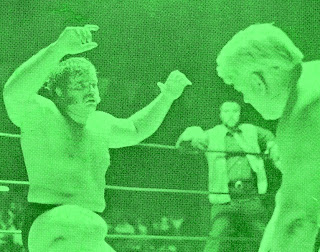 RIP appears to be on the attack as Manager 'Playboy' GARY HART looks on.
Hey, get down off that ring apron, Gary. 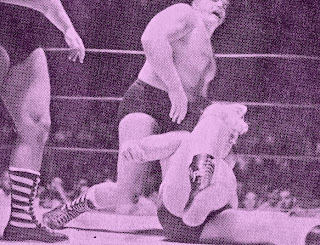 Generally, when wrestling another heel team, the crowds pulled for RIP and SWEDE. I remember that to be the case when they wrestled ALDO BOGNI and BRONCO LUBICH, BRUTE BERNARD and SKULL MURPHY and THE INFERNOS.

The only time I ever saw GENE and OLE getting the cheers was when they tangled with RIC FLAIR and GREG VALENTINE.
Posted by Mike Cline at 3:23 AM No comments: 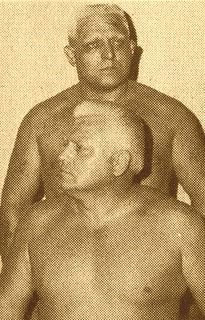 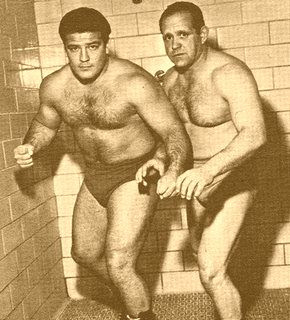 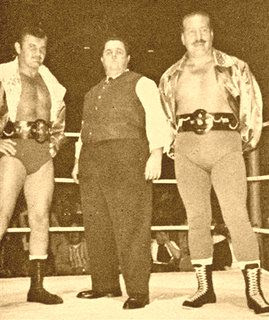 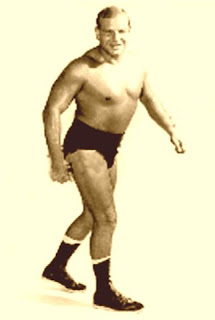 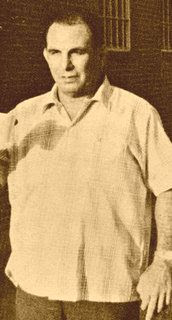 JESSE JAMES
---
A rematch of a thriller of several weeks ago features wrestling tonight at the LEXINGTON YMCA with the 'BLONDE BOMBERS', RIP HAWK and SWEDE HANSON, meeting the popular Texas duo of NELSON ROYAL and PAUL JONES.

The last time the two teams met, each had a fall when the one hour time limit ran out, and a draw was declared. Neither team being satisfied with letting it go at that, both combos have asked for a rematch. Requests granted. Both teams predict a victory in tonight's best two-out-of-three falls battle.

In another two-of-three-falls match, the hero unit of young PAUL DEMARCO and BOBBY NICHOLS will challenge the rugged duo of ALDO BOGNI and BRONCHO LUBICH, who will be joined by their pesky manager GEORGE 'TWO TON' HARRIS.

After tonight's card, professional wrestling at the LEXINGTON YMCA will be discontinued for a temporary basis until late September. The reason is the extreme hot weather that has made the YMCA gymnasium uncomfortable for large crowds. Wrestling fans are reminded that this move is only a temporary one until cooler weather arrives.
Posted by Mike Cline at 3:42 AM No comments: