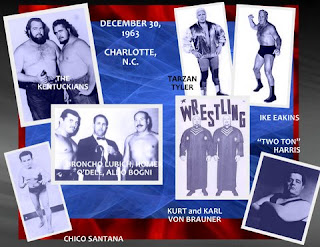 Some of the roughest tag team action of the winter is expected in the two top bouts that head up 1963's final professional wrestling card tonight at PARK CENTER.

The big number has THE KENTUCKIANS, BIG BOY BROWN and TINY ANDERSON, tackling bullies ALDO BOGNI and BRONCHO LUBICH for one hour, two-of-three falls. Meddlesome manager "COLONEL" HOMER O'DELL will be in the BOGNI / LUBICH corner.

The semi-windup affair pits the rugged German brother duo of KURT and KARL VON BRAUNER against the equally rough combo of IKE EAKINS and TARZAN TYLER. This match is set for forty-five minutes, also the best-of-three falls. TYLER and EAKINS will have to keep an eye peeled for the German's manager, "GENTLEMAN" SAUL WEINGROFF, who will accompany his men to the ring.

The 8:15 opener has a pair of fast-moving midgets going at it. CHICO SANTANA and MAURICE CEMARD are the participants.
Posted by Mike Cline at 2:59 AM No comments: 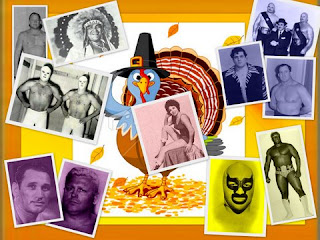 The outstanding wrestling card of Autumn 1961 takes place in the Queen City tonight at the "Big Dome" CHARLOTTE COLISEUM.

The first bell will ring promptly at 8:15, and fourteen of the nation's most sought-after grapplers will spring into action.

The arrogant German team of KURT and KARL VON BRAUNER will mix with LENNY MONTANA and the polished PAT O'CONNOR in the best-of-three falls main event.

"GENTLEMAN" SAUL WEINGROFF, the crowd-baiting, cane-bearing handler of the European tandem, has been "barred" from ringside unless he wears a straight jacket.

"I'll be there," promises Saul. "I feel I am being persecuted by this handicap, but my boys want me there, so I won't let them down."

The complete line-up of wrestling stars is impressive.

THE GREAT BOLO, the brutal masked villain, is back and collides with SWEET DADDY SIKI.

RIP "THE PROFILE" HAWK and New Zealand's ABE JACOBS will test one another.

Another tag match will take place when the popular duo of GEORGE BECKER and CHIEF BIG HEART face THE MASKED MEDICS in another two-out-of-three falls battle.

An autograph session will take place starting at 7:00.

Tickets can be purchased at the NATIONAL HAT SHOP in downtown Charlotte or at the Coliseum box office.
Posted by Mike Cline at 3:18 AM No comments: 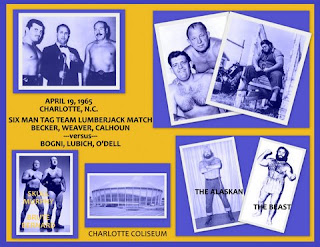 HAYSTACK CALHOUN, the mountain that walks like a man, returns to Charlotte tonight, and GEORGE BECKER and JOHNNY WEAVER couldn't be happier.

Ten wrestlers have been assigned to station themselves around the ring while the main event action is going on. Should any member of either team try to leave the ring area or be thrown from it, the ten lumberjacks have orders to pitch the combatants back into the melee. It isn't likely any member of the CALHOUN / BECKER / WEAVER trio will do any running. In fact, these three want to stay in the ring with the villainous trio as much as possible. They seldom get the opportunity to get their hands on the slippery O'DELL, who is usually causing trouble in tuxedo attire (and cane) outside the ring.

In tonight's best-of-three falls contest, O'DELL will be a participant in wrestling attire. There's a 60-minute time limit for the match, with a NO DISQUALIFICATION stipulation in effect.

Another tag team match on the card will send two of the baldest and meanest men in the wrestling business, BRUTE BERNARD and SKULL MURPHY, against the rugged team of THE ALASKAN and THE BEAST in a two-out-of-three falls "Battle of the Bullies" clash.

One could toss a coin to determine which of these two rule-breaking teams is the more vicious. Many fans are hoping the two duos will destroy each other, so the wrestling business won't have to deal with either of them any longer.

A fantastic JIM CROCKETT PROMOTIONS supporting card will underline this giant professional wrestling spectacular, which gets underway at 8:15 p.m.

Tickets can be obtained at the COLISEUM box office or the NATIONAL HAT SHOP in downtown Charlotte.
Posted by Mike Cline at 3:09 AM No comments:

THE QUEEN OF CROCKETT PROMOTIONS 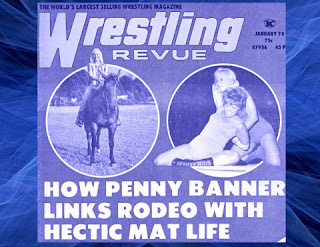 It took Mary Ann Kostecki only one professional wrestling match to decide to change her name.

The transition in identification came not so many years ago in a small Ohio town where the shapely St. Louis blonde with the green eyes made her mat debut under the tutelage of the late Billy Wolfe.

"Sure, I was nervous until the bell rang, but you might say I was more embarrassed when I heard the ring announcer struggling with my name. I won the match and Billy agreed I had a name nobody could remember," said the statuesque young lady. 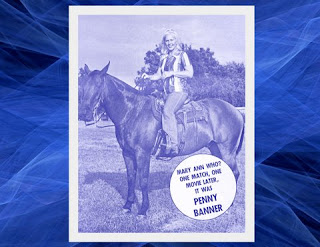 It has been written previously that Penny selected the name from the movie ARROWHEAD, a film she had seen that starred Charlton Heston, one of her favorite actors. "Heston's name in the movie was Banner, and my mother had always called me Penny as a little girl. So I became Penny Banner from my second wrestling match."

She didn't know it at the time but when Penny joined a judo class at a YMCA, it was her first step toward a pro mat career and eventually national stardom. Sam
Muchnick, president of the National Wrestling Alliance saw Penny giving a judo demonstration on television and was impressed with what he saw. Muchnick called her the next day after seeing the blonde flip a few Marines who were also on the TV show. The NWA President gave Penny a letter to Billy Wolfe, who ran an all-girl wrestling school in Columbus, Ohio, and she was on her way. And she was starting with the right man as Wolfe had been instrumental in the careers of the likes of Mildred Burke, Juanita Coffman, Therese Thies, Mae Weston and The Fabulous Moolah.

When asked how long it took in training before she was assigned her first wrestling match, Penny replied, "When I first began training, Mr. Wolfe told me it usually took about six to nine months of serious conditioning before any girl got her first chance. But with my judo and physical education experience, I got the green light after one week."
. 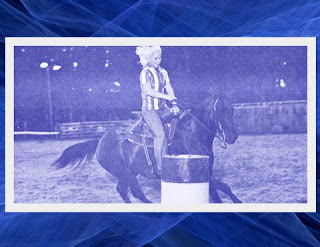 As she gained experience, Penny sharpened her skills and rolled up an impressive string of wins while campaigning through Ohio, Kentucky, Tennessee, and the Carolinas. Girl wrestling is very popular in these areas. She continued her march over some of the top female performers in the country and sought a match with June Byers, who had succeeded Mildred Burke as the NWA women's champion. "It started that Byers was taking on all comers, and I made up my mind that this was my big chance. I walked into the ring in Columbus one night and challenged her. She accepted my challenge." Penny surprised a lot of people that night by taking the highly-touted Texas lass to a ten-minute time limit draw. A later match for the title saw Byers winning the first fall, Penny the second, and time expiring before the third fall could begin. 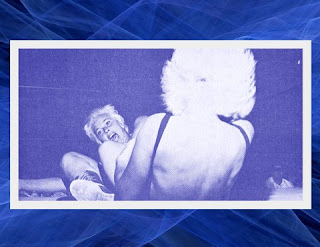 June Byers was the victim of a serious automobile accident shortly after her last match with Penny and forced to retire. Banner then teamed up with Bonnie Watson for tag events and were highly successful until romance broke up the duo when Bonnie married. Betty Hawkins became Penny's partner, and they won the Western Canada girls' tag title and were undefeated for two years. Betty then married, and Penny was forced to again find a new partner. She was Lorraine Johnson. Together, they won the Women's World Tag Title in St. Joseph, Missouri and had a long winning streak until Cupid entered the picture again. But this time it was Penny who married...a popular Indianapolis wrestler, Johnny Weaver. The two would later have a daughter, Wendi, who at six months of age made Banner think differently about her career. "My wrestling schedule was keeping me away from Wendi and Johnny. Being a wrestler was thrilling but my family was more important to me." 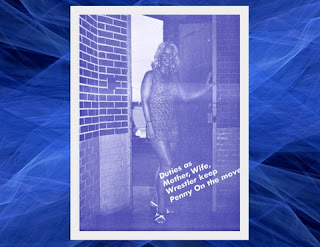 As Wendi grew up, Penny and Johnny switched their home from St. Louis to Charlotte, North Carolina, where Johnny made his wrestling home. Penny wrestled a limited schedule, finding the balance between her career and being a good wife and mother.

When time permits, the Weaver clan enjoy golf and bowling plus Johnny's penchant for watching Sunday sports on TV and a good game of cards. Penny and Wendi, now twelve, love horses and are excellent riders. They own quarter horses not far from their home and compete in numerous shows in the Charlotte area. They have a roomful of ribbons and trophies in their home which they have won competing. 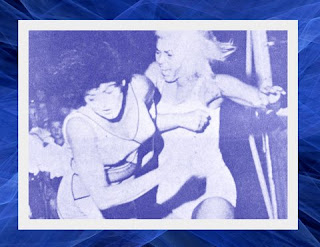 Penny enjoys simple tastes in cooking vegetables, mashed potatoes, roast beef, stuffed peppers and sauerkraut. She also believes every woman should take good care of their bodies. "Our bodies are like a house. If we take care of it, it will take care of us. I like to work out three times a week." Banner has had her share of injuries over the years, including a bad knee which is one of her main weaknesses right now. It has been dislocated five times with ligament and tendon damage.

But for now, Penny will continue to wrestle when she wants. And why not? Penny Banner still rates high among the top ten female wrestlers in the world today.

Taken from WRESTLING REVUE, January 1974 and written by GENE GORDON.
Posted by Mike Cline at 4:26 AM No comments: