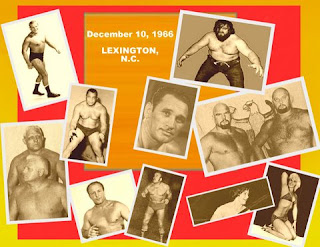 Two tag teams plus a battle between two pretty girl grapplers give interest to tonight's LEXINGTON YMCA mat card, kicking off at 8:15.

The popular duo of KLONDIKE BILL and ABE JACOBS are rematched tonight against KURT and HENRY VON STROHEIM. The German brothers made demands for this return match after a disputed loss to BILL and ABE here last Saturday.

Both tag team battles are set for the best two-out-of-three falls.

PENNY BANNER, the most popular girl wrestler around these parts, faces stiff competition when she faces TAMMY JONES, a not-so-nice lady, in a special one fall event.

TINKER TODD clashes with EL GAUCHO in the opening bout of the night. Don't look for many rules to be followed in this one.
Posted by Mike Cline at 4:02 AM No comments:

LONG HAIR versus NO HAIR 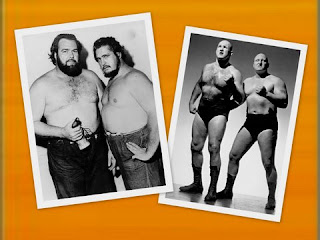 Two of the biggest men in professional wrestling will collide with two of the roughest and most unpredictable men of the sport. The impact will be felt tonight at the LEXINGTON YMCA. Action begins at 8:15.

It will be THE KENTUCKIANS, TINY ANDERSON and BIG BOY BROWN, all 750 pounds of them, facing the skin-headed duo of BRUTE BERNARD and SKULL MURPHY in the two-out-of-three falls main event.

The big boys from the hills want to settle some old scores with the ruffians from Canada and Ireland. Encounters between the two teams in the past have been wild and wooly affairs.

While the tag team battle is the evening's bill of fare, there will be three singles matches as well.

The opener sends GEORGE GRANT against PAT O'BRIEN.
Posted by Mike Cline at 4:48 AM No comments: 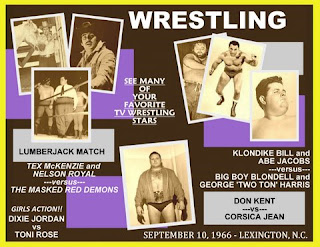 A LUMBERJACK MATCH has been scheduled to see if two top wrestling tag teams, TEX McKENZIE and NELSON ROYAL on one side, the MASKED RED DEMONS on the other, can settle their differences at the LEXINGTON YMCA tonight.

Six other wrestlers will spot themselves around the ring to prevent any runouts of any type taken by the RED DEMONS two weeks ago.

The Texas duo won that match on a count out. Tonight's main event is set for two-out-of-three falls within a one-hour time limit.

A special event will send girl wrestlers TONI ROSE and DIXIE JORDAN against one another in what should be a crowd-pleasing event.

Newcomer DON KENT, who debuted here last week, meets CORSICA JEAN in a singles bout, kicking off the card at 8:15.

KLONDIKE, JACOBS, HARRIS, BLONDELL, KENT and JEAN will serve as the six lumberjacks during the headliner.
Posted by Mike Cline at 4:16 AM No comments:

ONLY ONE BRUTE BERNARD 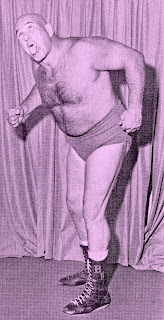 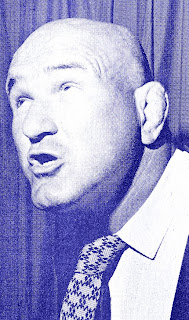 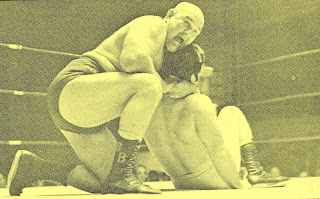