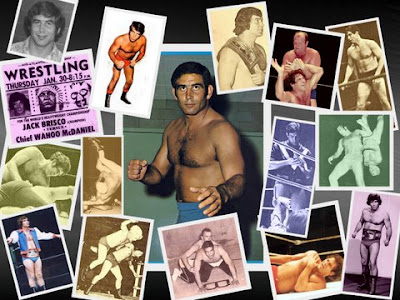 
Born Freddie Joe Brisco, he grew up in Blackwell, Oklahoma with five siblings. He was followed by his younger brother, Gerald Brisco, into the sport of wrestling and turned down a football scholarship at University of Oklahoma to go to Oklahoma State. In 1965, he became the first Native American to win an NCAA National Championship.
Jack's first documented professional championship reign began on October 16, 1965, when he defeated DON KENT to win the NWA MISSOURI JUNIOR HEAVYWEIGHT title.
He also won his first tag team title in this promotion, teaming with HAYSTACK CALHOUN as co-holder of the NWA U.S. TAG TEAM CHAMPIONSHIP.

BRISCO headed east to Florida in 1968. Here his career skyrocketed. Over the course of the next few years, JACK held virtually title in the Sunshine State. 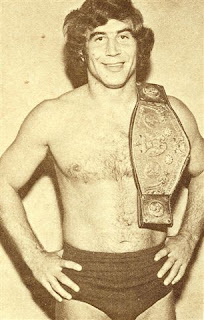 BRISCO's first NWA WORLD HEAVYWEIGHT CHAMPIONSHIP began in Houston, Texas when he defeated HARLEY RACE on July 10, 1973. He wore the belt until losing to GIANT BABA on December 4, 1974, then regained the title four days later. JACK remained the champion until December 10, 1975 when he was defeated by TERRY FUNK.

I was thrilled when Ted Turner's independent CHARLOTTE TV station began carrying CHAMPIONSHIP WRESTLING FROM FLORIDA in the late 1960s. The first wrestler who jumped out of the screen at me was JACK BRISCO.


This young man was something special. He didn't have the look of many of the 'stereotypical' wrestlers of the day. Here was a nice-looking, clean-cut, college grad young man (there weren't many back then), and he could really go in the ring.


JACK soon began appearing in the MID-ATLANTIC territory on a limited basis. My first occasion to see JACK wrestle in person was August 4, 1969, when he teamed with MR. WRESTLING (TIM WOODS) to face THE GREAT BOLO and BOLO at the original CHARLOTTE COLISEUM. 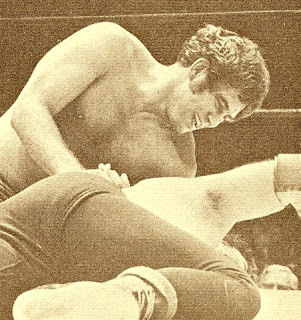 Later, I was able to attend a CHARLOTTE PARK CENTER card when BRISCO battled THE MISSOURI MAULER (LARRY HAMILTON). There was also a night in the tiny hamlet of NORTH WILKESBORO, N.C. that I witnessed JACK and JERRY BRISCO meet SGT. SLAUGHTER and DON KERNODLE. (This night, I believe, was also the final night of PAUL JONES' career as a full-time wrestler. PAUL was pinned on this card by TOMMY GILBERT--EDDIE's father. The next night in CHARLOTTE, PAUL was a manager.)


Few athletes have attained the honors and awards that JACK BRISCO has earned. From NCAA champion to NWA champion, BRISCO has worked throughout the world, entertaining fans of wrestling.


He certainly did that for me.


JACK BRISCO will always be at the top of my list, and I thank him for all of the many memories.
Posted by Mike Cline at 2:59 AM No comments:

BECKER BACK IN LEXINGTON

GEORGE BECKER and ABE JACOBS, a couple of top heroes with local wrestling fans, will return to the LEXINGTON YMCA for mat action tonight.

The two gladiators, who recently have operated as a tag team, will divide their forces this week to meet rugged opponents in a pair of singles main events.

Both matches are set for the best-of-three falls.

A preliminary match between SID JONES and PRINCE OMAR will open the card at 8:15.
Posted by Mike Cline at 2:58 AM No comments: 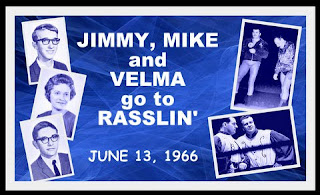 Maybe you had to have been there.

And I wish you had, as this was a most memorable evening.


Backtracking a bit, I should point out that Jimmy Lewis and I had become good friends, having been in the same fourth grade class at N.B. Mills Elementary School. But the opening of Northview the following school year took care of that, at least for a while. I remained at N.B. Mills, but Jimmy was in the newly-developed Northview district, and off he went. Two years later, because of the Center Street dividing line, we continued apart - - he went to Oakwood and I went to D. Matt.


But the summer before SHS found us reunited in the classroom basement of the high school gymnasium trying to grasp the elusive concepts of Algebra I, something neither of us had accomplished in our final year of junior high. Cutting to the chase, we quickly became good friends once again and remained nearly inseparable our three years at SHS. In fact, Jimmy lived with my mother and me our senior year.


One memorable occurence I clearly recall is the night of June 13, 1966.


I had watched CHAMPIONSHIP WRESTLING most Saturday afternoons on WBTV-Channel 3 for several years, and aside from attending a few live wrestling shows on the rare instances they were held in Statesville, had never been to see them in the metropolis of Charlotte.


Jimmy and I had watched the wrestling show on June 11th and decided we wanted to go to see the live matches in Charlotte which were advertised on that week's TV show. But there was a problem - - how to get there. Both of us were still fifteen, thus no driver's licenses.


So we put our two skulls together and decided to ask my mother to take us. It wouldn't be an easy task of getting her to agree to our request. But Jimmy could be quite persuasive and so could I, and together as a tag team, we liked our chances. So we placed our one-sided proposal on the table, and my mother said yes. It had been much easier than we had expected.


In fact, my mom (Velma) asked a co-worker to go with us, and it became a foursome.


We left Statesville that Monday as soon as she got off work at 5:00 and headed for the "big city." Of course, no interstate to Charlotte then, so we went south on Highway 21 through Troutman (hey, there's the fair grounds), the then tiny hamlet of Mooresville and we eventually came into Charlotte. Our destination for wrestling was the Park Center (now Grady Cole Center). Being close to the then-popular Charlottetown Mall, we went to the S&W Cafeteria for a nice meal. Then off to the matches.


We arrived at Park Center, parked our really hot 1963 Plymouth Valiant (which would go from zero-to-sixty in ten minutes), and bought our RINGSIDE tickets.


I was soon sitting in the famous (to me) building, which held around three thousand. By the time the starting time of 8:15 rolled around, I doubt there was a seat to be sold.


After an intermission, it was time for the main event match, and it was just not any main event, this match was for the Southern Tag Team Championship, which at the time, I thought, really stood for something, but I later discovered it was just a gimmick.


Up to this time, Jimmy and I had cheered and booed the wrestlers a little, but Velma and her friend sat silently. I assumed they were not having a great time. Mom would probably have been satisfied to be home watching THE ANDY GRIFFITH SHOW and BEN CASEY. After all, she had to go to work the next morning, and with school just out, Jimmy and I could sleep until noon.


The crowd roared with approval when George and Sandy Scott made their way to the ring. They were the "good guys" and were known as The Flying Scotts because they used an arsenal of high-flying maneuvers such as drop-kicks and flying head scissors.


As soon as the crowd's screaming died down, out came the "bad guys," who were also the current champs. Aldo Bogni and Broncho Lubich were their names, and they were not well-respected among wrestling fans. And they also had an ace-in-the-hole. They used the services of a manager. His name was Homer O'Dell. Mr. O'Dell always was donned in a formal tuxedo and was dressed to the nines. He also carried a cane, which he was known to use for everything except walking. By everything, I mean he used the cane to choke, to poke and to outright hit anyone who opposed his charges. O'Dell was easily the most-hated man in Charlotte-area wrestling for the entire decade. Big Bill Ward often said of him on TV that Homer was "so low he'd have to walk on stilts to look a snake in the eye."


These four wrestlers were at the top of the business at that time, and they REALLY knew how to get the crowd involved. Ring psychology in wrestling was always a key to being successful in the business, and these guys had masters' degrees in their craft. The crowd was up and down more than a Lutheran church service, screaming their lungs out, cheering and booing. O'Dell used the cane on the Scott brothers, nearly inciting a riot. Fortunately, no one went overboard to the point the Queen City's finest had to get involved.


I looked over at Velma and her friend, and they were going wild just like everyone else.


The full sixty-minute time limit on the match expired, the referee separated the participants, and the villains scurried out of the ring with their championship belts and went to their dressing room. The "good guy" Scott brothers remained in the ring for a while, accepting the crowd's cheers and applause for a job well done, even if they had come up short becoming the new champions.


They finally exited the ring and headed up the aisle back to their dressing room. It happened to be the aisle where we were sitting. Velma was on the end of the row. Keep in mind, these guys had been going at it for a full hour and under the hot ring lights, they looked as if they had been dropped into a well. As the two grapplers passed her, she reached out and patted one of them on the back. The perspiration went everywhere, including all over Velma.


It got her good. But she shrugged it off and we all headed for the parking lot. The show was over.


As we headed out of Charlotte, we stopped for a snack at Krispy Kreme, capping off the evening.


Then the long drive back to the City of Progress. 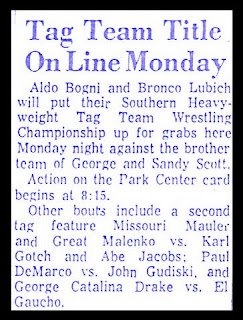 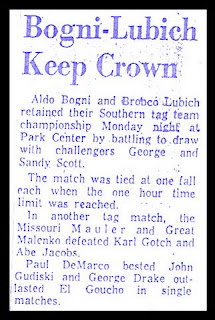 Posted by Mike Cline at 3:13 AM No comments:

TWO GREAT MERCHANDISING OFFERS TOO GOOD TO PASS UP !
BE THE FIRST IN YOUR NEIGHBORHOOD TO TAKE ADVANTAGE ! 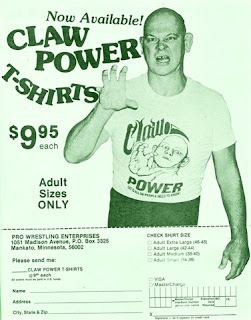 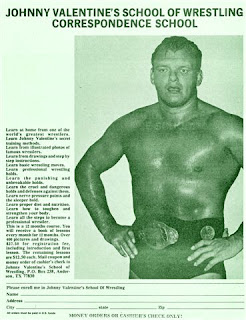 Posted by Mike Cline at 4:02 AM No comments: