When I use the term "back yard wrestling," I'm not talking about kids of today doing a big splash off their roof down onto a trash can.

I actually mean that on a hot night, fifty-three summers ago, JIM CROCKETT PROMOTIONS scheduled a big night of wrestling in my home town.

So, there it was, the big grappling stars of WBTV and WGHP right there in my own "back yard"...so to speak.

GEORGE BECKER and JOHNNY WEAVER
---
The final open air wrestling program of the year will be presented in Tiger Stadium tonight under the sponsorship of COMMUNITY BASEBALL, INC., and the four match program will send into action some of the top names of the mat sport.

GEORGE BECKER and JOHNNY WEAVER, the SOUTHERN TAG TEAM CHAMPIONS, will meet the rugged team of RIP HAWK and SWEDE HANSON in the featured event, scheduled for the best two-out-of-three falls within a one hour time limit. It's a non-title match, but the battle will renew a long-time mat rivalry and definitely carries championship status, for should HAWK and HANSON win tonight, it will put them in a great position to force a championship showdown with the titleholders..

An added tag team match on the star-studded program will see the former tag champions, ALDO BOGNI and BRONCHO LUBICH, with their controversial manager, HOMER O'DELL, facing a team composed of two of the rising young heavyweights in the business - blond LES THATCHER of Hammond, Indiana, and RUDY KAY of Chicago, Illinois. This, too, is for the best-of-three falls, and carrying a 45-minute time limit.

Adding to the luster of the card is a special event in which THE MISSOURI MAULER, the SOUTHERN HEAVYWEIGHT CHAMPION, will meet NELSON ROYAL, the aggressive and popular partner of TEX McKENZIE, and an outstanding star in his own right.

Ringside tickets are on sale at the STATESVILLE CITY NEWS STAND on a first-come, first-serve basis. 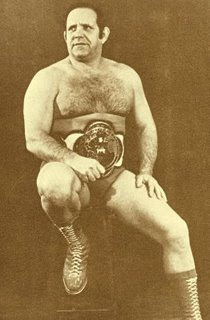 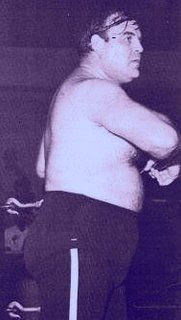 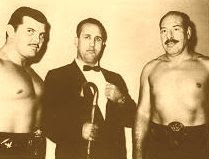 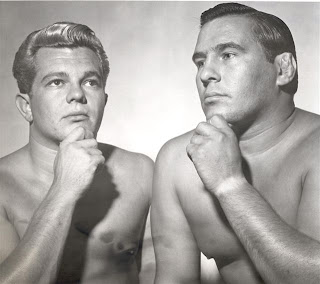 LES THATCHER and RUDY KAY
---
GEORGE BECKER and JOHNNY WEAVER, the most popular wrestlers ever in the Carolinas, will devote time prior to tonight's program to appear and greet their many friends in the grandstand and at ringside. The two stars will sign autographs and chat with fans from 7:45 until the 8:15 starting time, so here is the opportunity for all folks who have wanted to meet these fine sports figures to do so.


Regretfully, a massive summer storm ripped through Statesville during the day, and the program was canceled.

I was one unhappy sixteen-year-old that night.
Posted by Mike Cline at 4:13 AM