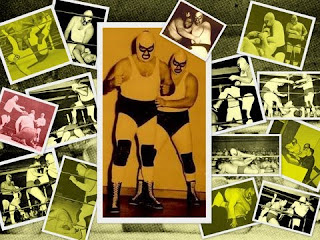 We don't hear much talk anymore about JIM CROCKETT PROMOTIONS wrestling as far back as the late 1950s.

Many of the adult fans (and wrestlers) of that era have passed away.

But there are a few of us who were just youngsters at that time who remember many of the stars of sixty years ago.

On the other side of right and wrong were guys like THE SMITH BROTHERS, DUKE KEOMUKA and MR. MOTO.

But many fans of today, even though they don't remember them or weren't around to see them, have heard of THE BOLOS.

There were probably as many guys at my elementary school who tried to make a BOLO mask out of one of their Mom's discarded pillow cases who wore bath towels as Superman capes.

Making a BOLO mask wasn't easy. I found that out.

First, in the late 1950s, there was THE GREAT BOLO (Tom Renesto). Then, in the early 1960s, the masked man added an identical-looking partner, BOLO (Jody Hamilton). THE GREAT BOLO and/or BOLO were the top heels in JCP for close to six years, before heading further south, eventually changing their names to THE ASSASSINS. 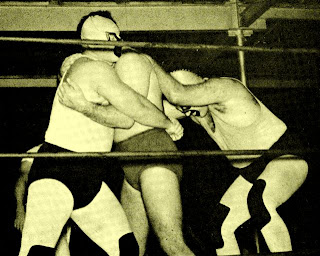 Fans all over the MID-ATLANTIC CHAMPIONSHIP WRESTLING territory bought many a ticket to the matches to see THE BOLOS not only lose, but be unmasked.

Hero grapplers such as THE KENTUCKIANS, BECKER, WEAVER, THE SCOTTS, CHIEF BIG HEART, BILLY TWO RIVERS, HAYSTACK CALHOUN and MIKE CLANCY all tried over and over to expose the identities of the hooded hoodlums, but, alas, it never happened. Occassionally, THE BOLOS lost a match and even a mask here and there, but they always escaped protecting their identities.

Not until years later in Georgia, when Tom Renesto retired from active wrestling and voluntarily removed his mask on television, did the public ever know the identity of either of these men.
Posted by Mike Cline at 4:01 AM