TAKE ME OUT TO THE BALL GAME

On a summer afternoon in 1987, in Charlotte, North Carolina, CROCKETT PARK was the scene of one of the most fascinating sports competitions in the Tarheel state's history.
It wasn't Duke playing North Carolina, it wasn't the LA Dodgers against the SF Giants, not even the Boston Red Sox against the NY Yankees.
On this day, before the birth of the CHARLOTTE HORNETS, the CAROLINA PANTHERS or the CHARLOTTE BOBCATS, the professional wrestlers of JIM CROCKETT PROMOTIONS took on a team of employees of the Queen City's WSOC RADIO station for a softball charity fund raiser.

'The Russian Nightmare' NIKITA KOLOFF plays his left field postion. (It is rumored that Nikita tried to 'sickle' the home plate umpire on a disputed called third strike.) 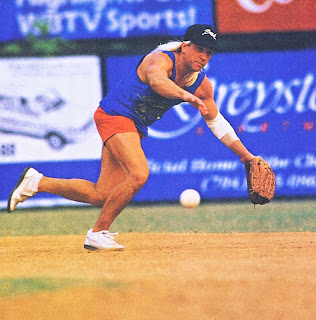 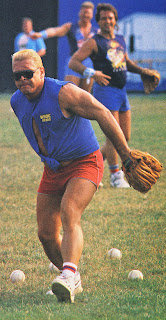 'Hands of Stone' RONNIE GARVIN warms up to pitch for JCP. 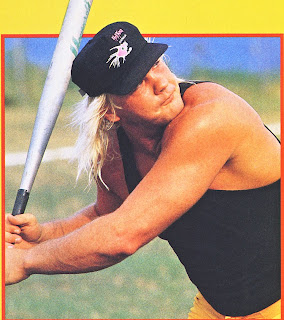 BARRY WINDHAM takes his cuts at the plate. 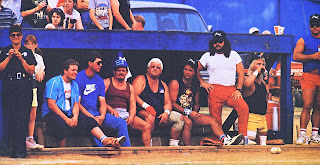 A look into the MID-ATLANTIC dugout (how many can you name?)