Some of professional wrestling's biggest stars will be featured on an all-star card at the PRICE HIGH SCHOOL * gymnasium in Salisbury, N.C., tonight.

GEORGE BECKER and BILLY TWO RIVERS, perhaps the most popular tag team to ever work together in the Carolinas, will clash with rugged bullies SWEDE HANSON and ALDO BOGNI in the two-out-of-three falls main event.

HANSON, who is sometimes called "Big Foot" for the simple reason that he wears a size fourteen shoe, is one of the most brutal grapplers on the wrestling circuit. He specializes in drop-kicks, and his huge feet come in mighty handy in this maneuver.

TWO RIVERS, a full-blooded Indian, is particularly popular with the younger generation of fans. Many Carolina youngsters have copied his "Mohawk" style haircut (probably to the dismay of many parents).

Negro wrestlers are featured in the other matches.

PAUL HARRISON, from Dallas, Texas, and JIMMY BALLARD, from Memphis, Tennessee, two rugged Negro grapplers, will face one another in the opening contest.

The first match starts at 8:15 p.m. A large crowd is expected, so come early.

GEORGE BECKER and BILLY TWO RIVERS were too much for SWEDE HANSON and ALDO BOGNI in the main event wrestling match at PRICE HIGH SCHOOL last night. The good guys took two straight falls over the bad guys. BECKER took BOGNI for the first fall with his "abdominal stretch." TWO RIVERS' war dance followed by tomahawk chops took the toll of HANSON for the second and deciding fall.

A crowd topping 1200 attended with proceeds going to the PRICE HIGH SCHOOL band program. Another wrestling show may be booked in the near future, it was reported.

* PRICE HIGH SCHOOL was the then all-black high school in the Salisbury City School system.
Posted by Mike Cline at 3:15 AM No comments:

THE ONE THAT GOT AWAY 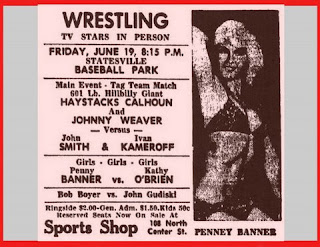 This newspaper clipping, courtesy of Mark Eastridge and Dick Bourne, saddens and angers me in that a JIM CROCKETT PRMOTIONS wrestling show came to my home town and I didn't go.

Fifty-five years out, I don't know if I wasn't aware of its happening or I just couldn't get there. I was a mere thirteen at the time.

Maybe I was grounded as punishment for some dastardly deed I had perpetrated.

Whichever, it's one that got away.
Posted by Mike Cline at 3:13 AM No comments:

FIVE OF THE GREAT ONES

...to five great wrestling stars who each sold plenty of tickets for JIM CROCKETT PROMOTIONS and always gave the fans their money's worth... 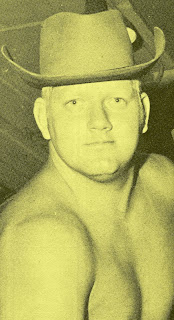 He wrestled as a 'babyface' or as a 'heel'. Either way, the fans LOVED him, and so did the other wrestlers. A second generation wrestler. They'll never be another like him. 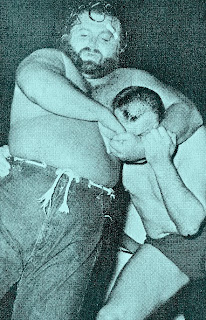 A main eventer for JCP in the 1960s, then lower card as his career come to a close. Stayed with the company after active ring work and was head of the ring crew.
A gentle giant of a man whom everyone liked. 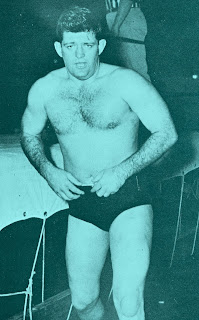 Rich Landrum dubbed him 'The Dean of Professional Wrestling'. He could do it all---wrestle, book, promote. Johnny was at the top of the heap for CROCKETT PROMOTIONS for at least ten years, both as a single and tag partner. To state it bluntly, JOHNNY was THE MAN before there was a Flair.)

Here's a man who did it all in the business, and regardless of what he did, he was over BIG TIME. The fans loved BJ---and loved to hate him when they were supposed to do so. Ask any wrestler who knows him, and I'm sure you will hear a great story about a guy who gave his all to the business. 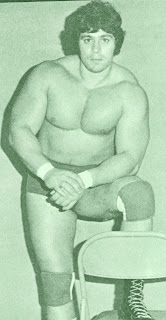 In JCP, held the WORLD TAG TEAM CHAMPIONSHIP with MR. WRESTLING (TIM WOODS). Top main eventer in whatever territory he worked. Was murdered in his Quebec home.
Posted by Mike Cline at 3:25 AM No comments:

FLAIR / STEAMBOAT - NOBODY DID IT BETTER 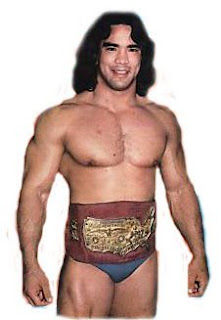 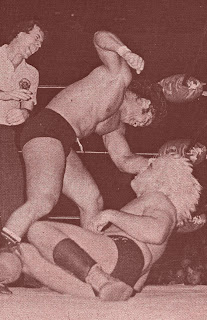 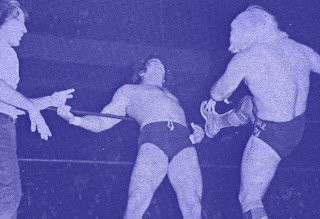 YOUNG looks on as FLAIR refuses his 'official' request... 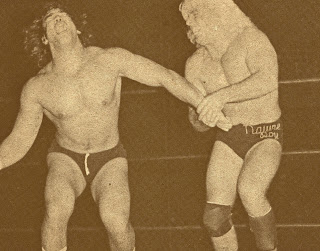 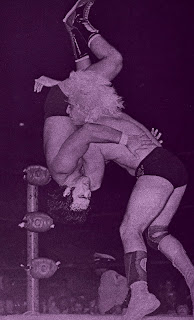 Whether they were opponents or partners, the matches of FLAIR and STEAMBOAT lit up the JCP territory as much as anything during the 1970s and 1980s. 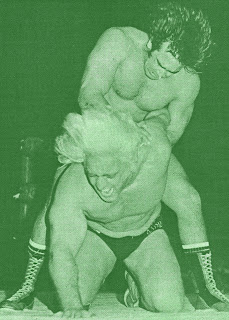 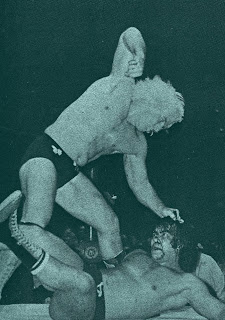 Flair returns the favor.
Posted by Mike Cline at 2:46 AM No comments:

WERE THESE GUYS YOUR FAVORITES?

No one can dispute the fact that JIM CROCKETT PROMOTIONS always had the top stars of the business.

Here are seven of them... 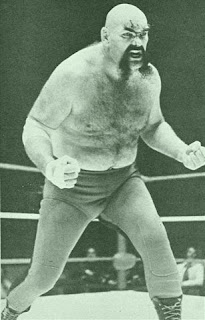 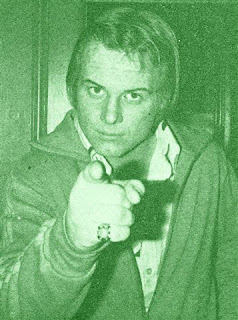 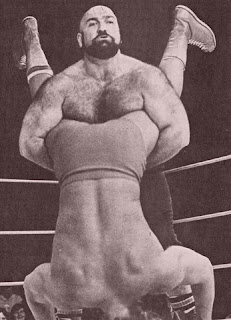 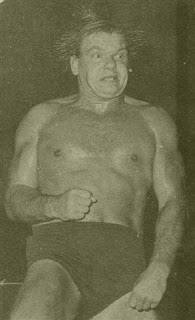 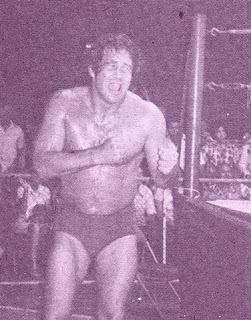 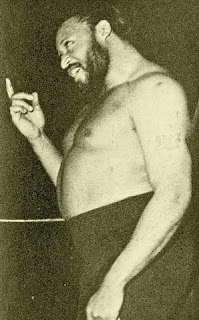 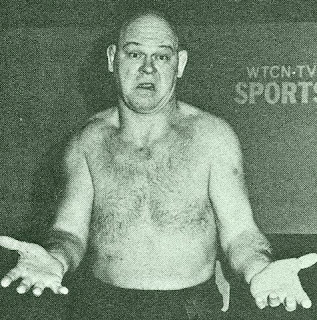 BARON VON RASCHKE
Posted by Mike Cline at 5:28 AM No comments:

CHILLIN' WITH RIP AND SWEDE 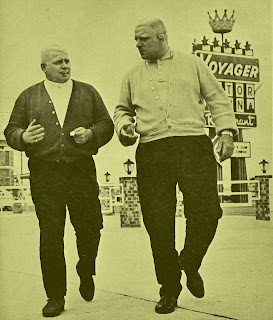 Rip and Swede about to enjoy another day off from ring action... 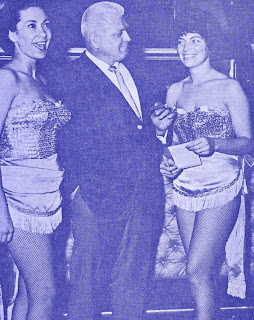 A little time for serious conversation, but probably NOT politics... 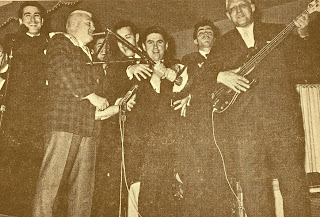 Giving THE BEATLES and THE BEACH BOYS a little musical competition. 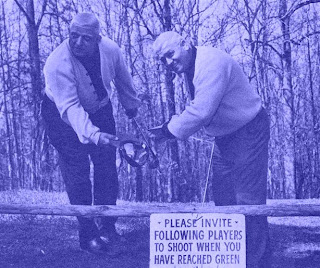 Back to the links. Always a round of golf on a day off. 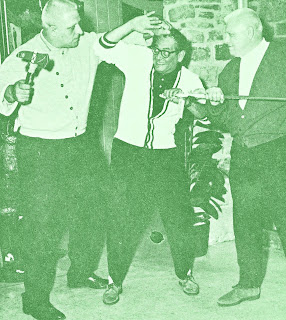 On no! Apparently the hotel has overcharged the guys on their bar tab!
Posted by Mike Cline at 3:51 AM No comments: