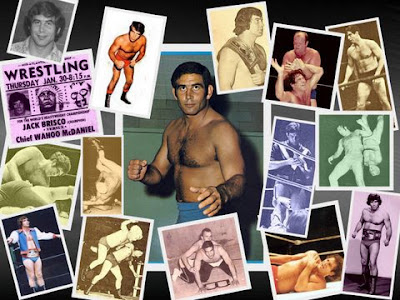 A real gentleman to his wrestling fans.

I must confess --- my wonderful wife was never a big pro wrestling fan. She attended matches with me, on occasion, to be nice. She tolerated wrestling.

But in the late 1960s, when Jack first came to the JIM CROCKETT PROMOTIONS territory from Florida, my wife loved Jack Brisco.

When I announced there was wrestling (mostly in Charlotte or Greensboro) coming up that I wanted to attend, she would ask, "Will Jack Brisco be there?"

If I answered, "Yes, Jack is wrestling so-and-so," she always replied, "Then I'll go with you."

Jack transcended the usual wrestling fan. His college wrestling reputation was good for the pro wrestling business. It added credibility.

A veterinarian opened his practice in my hometown in 1969. On my first visit to his office, I noticed his diploma on the wall. He had graduated from Oklahoma State University. I casually asked him if he had ever heard of their collegiate wrestling champion Jack Brisco.

"Are you kidding? EVERYBODY in the Mid-West knows Jack Brisco. He was in the class a year ahead of me," the vet told me. "I watch wrestling from Florida every week to see him."

SO MANY ARE GONE

"Time stands still for no man..."
---
It's part of life. And none of us will get out of here alive.
---
A large number of the JIM CROCKETT PROMOTIONS cast of characters of the last fifty years are no longer with us, but they left their trail and countless memories for all of us who plopped down our money for a wrestling ticket... 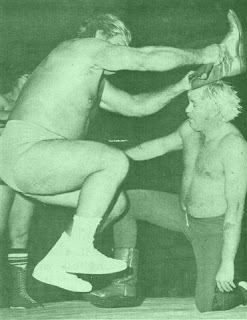 DANNY MILLER puts a boot to the noggin' of a pre-JOHN STUDD - then CHUCK O'CONNOR (deceased). 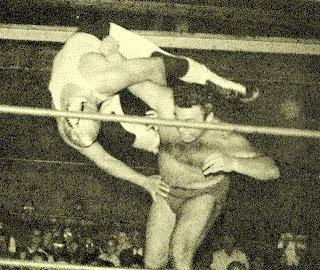 Has THE GREAT BOLO (TOM RENESTO-deceased) met his match in STEVE KOVACS (deceased)? 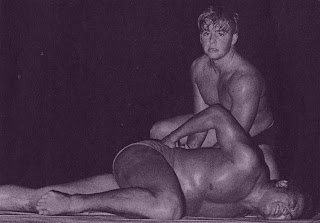 A young BOBBY SHANE (deceased) has HIRO MATSUDA (deceased) in a painful hammerlock. 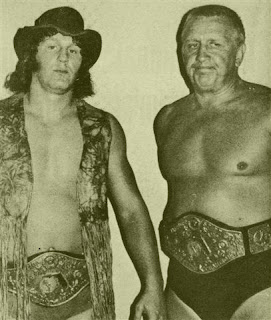 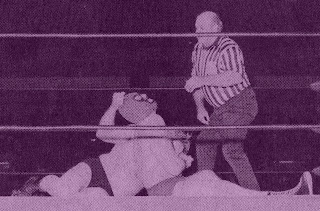 ART NELSON (deceased) pulls at the mask of THE MENACE (could it have really been LARS ANDERSON under the hood?) as referee ANGELO MARTINELLI (deceased) looks on. 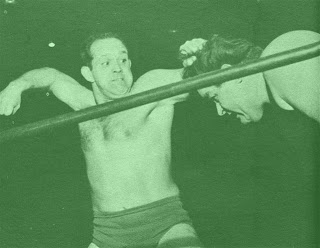 Two of my favorites go at it with NELSON ROYAL (deceased) about to lay one on GEORGE 'TWO TON' HARRIS (deceased).
Posted by Mike Cline at 3:33 AM No comments: