The SCOTTS meet the FARGOS 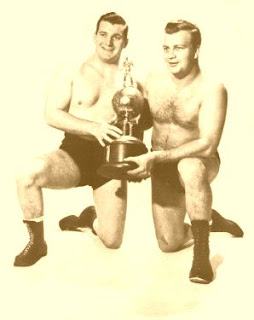 World Championship Wrestling, literally, comes to the LEXINGTON YMCA this weekend when two famous brother tag teams battle in the feature contest on a four match card this Saturday evening.

The FARGO BROTHERS won the crack at the tag team title with their second straight victory over JERRY MILLER and HENRY PHILLIPS here last Saturday night.

The SCOTT BROTHERS, a popular duo of Canadians, wrestled the title away from BILL LONGSTON and THE MIGHTY ATLAS recently. The new champs are returning to LEXINGTON after a lengthy absence.

JERRY MILLER will face RAY ANDREWS in one prelim, and the veteran CHUCK GARIBALDI takes on JIMMY SMITH in the 8:15 opening encounter.
Posted by Mike Cline at 3:39 AM