ANOTHER TOP JCP STAR HAS PASSED AWAY... 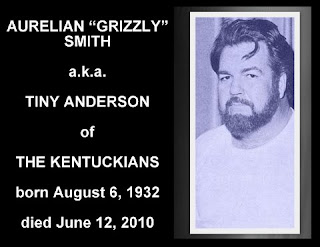 He was the father of professional wrestlers AURELIAN, JR. (a.k.a. JAKE "THE SNAKE" ROBERTS), Michael (a.k.a. SAM HOUSTON), and Robin (a.k.a. ROCKIN' ROBIN). 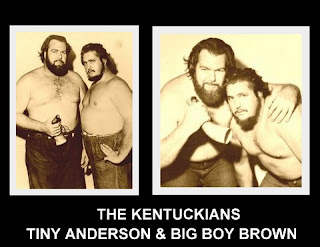 While wrestling in Texas in 1962, SMITH met LUKE BROWN (real name Carl Dennis Campbell, Sr.). The two formed a tag team known as THE KENTUCKIANS, using the hillbilly gimmick.
-
The team became one of the top duos in the country, filling arenas everywhere they wrestled, including JIM CROCKETT PROMOTIONS venues.
-
They worked all of the top heel teams on the JCP roster, i.e., BOGNI & LUBICH, HAWK & HANSON, BERNARD & MURPHY, SMITH and KAMEROFF.
-
But, without question, their biggest paydays came feuding with the masked team of THE GREAT BOLO and BOLO, later THE ASSASSINS (TOM RENESTO & JODY HAMILTON).
-
These four took their rivalry all over the United States, selling out buildings wherever they wrestled.
- 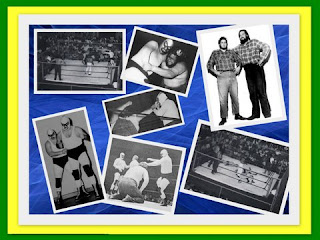 THE KENTUCKIANS versus THE BOLOS
(click on images to enlarge)
-
In the late 1960's, SMITH returned to the CROCKETT rings, teaming with MR. WRESTLING (TIM WOODS), again facing the top heel duos in the territory, including an unsuccessful run at the SOUTHERN TAG TEAM CHAMPIONSHIP, then held by GENE & OLE ANDERSON.
-
Our condolences to his family.
-

Posted by Mike Cline at 7:54 AM No comments: